One of the biggest super political action committees backing Donald Trump’s campaign has done little since the election other than pay a sizable salary to its top official, a longtime friend and business associate of the president’s former campaign manager, Paul Manafort.

Laurance Gay, the godfather to one of Manafort’s daughters, has been paid about $830,000 since the creation of Rebuilding America Now in June 2016. That’s far more than the bosses of other pro-Trump groups, including those that have actively promoted the president’s agenda.

“Super-PACs are the wild west,” said Michael Beckel, research manager at Issue One, which advocates for less money in politics. “They can pay their leadership as much as the market will bear.”

Gay’s story illustrates the largess of the super-PAC world, where donors seeking access and future influence can offer sums and salaries that typically far exceed those paid by actual campaigns. Donors don’t often ask detailed questions about how their money is spent and several who gave to Gay’s super-PAC didn’t return calls for comment.

Trump himself has taken note. “People get very rich running PACs, but we’re going to try and get that straightened out because it’s crazy,” he said at a Washington dinner a couple days before his inauguration.

In an interview earlier this month, Gay defended his salary and said he’s continued to pay himself $35,000 a month since his group last filed with the Federal Election Commission in July. His pay comes from roughly $1 million in reserves the super-PAC had at the start of 2017.

“We earned our money last year and we continue to earn it in trying to figure out what we do next,” he said. “It’s certainly less than I made when I was doing active public relations and public affairs work.”

Rebuilding America Now will be more active in the near future and plans to go after “people who are vehemently anti-Trump” in next year’s midterm elections, Gay said.

The group is about to hire an online fundraising firm, he said, and will also soon file with the IRS to create a second entity that will allow it to take unlimited contributions from donors who won’t have to be disclosed. Such groups can spend money to influence elections as long as their primary purpose isn’t political.

During the campaign, Rebuilding America Now was one of the premier pro-Trump groups. Gay helped form it almost immediately after he resigned from an unpaid position with Trump’s campaign in June 2016, and it spent $23 million against Democrat Hillary Clinton.

Manafort, who has pleaded innocent to federal money laundering and conspiracy charges filed in October, brought Gay into the Trump operation while campaign manager. But his fellow Connecticut native didn’t play a role in placing him at the super-PAC, Gay said. Trump’s billionaire friend Tom Barrack, who Gay describes as an acquaintance, was responsible, he said. Spokesmen for Barrack and Manafort declined to comment.

Gay, 64, said he’s spoken to Manafort once or twice since his indictment was announced — mostly about their beloved New York Yankees. Federal agents working for Special Counsel Robert Mueller haven’t contacted him as part of their continuing investigation into possible links between Russia and the Trump campaign, Gay said.

Trump aides made clear to 2016 donors that they liked what Rebuilding America Now was doing. Mike Pence, now the vice president, circulated a statement at the time saying that supporting the group was “one of the best ways to stop Hillary Clinton.”

A couple of the PAC’s donors joined the administration. Linda McMahon, the co-founder of World Wrestling Entertainment, who Trump appointed as the head of the Small Business Administration, gave $6 million. Other top donors included Home Depot co-founder Bernard Marcus ($5 million), poultry magnate Ronald Cameron ($2 million), and Anthony Scaramucci ($100,000), the New York financier who was ousted as White House communications director after about a week on the job.

Rebuilding America Now’s lack of 2017 spending on much beyond salaries and high-end Washington hotels and restaurants stands in contrast with at least three other pro-Trump groups that have worked to boost a president embroiled in the Russian investigation.

Leading the other pro-Trump efforts are the advocacy group America First Policies and its allied super-PAC, America First Action. Those organizations, which are sanctioned by the White House and employ several past Trump aides, have spent on things such as a television advertising campaign to help push the tax overhaul in Congress.

The Committee to Defend the President has placed ads to push for Supreme Court Justice Neil Gorsuch’s confirmation, conducted online advocacy and commissioned its own polling to try to counter mainstream data that shows Trump’s job approval at historic lows.

Great America PAC spent $2.6 million during the first six months of 2017, including on efforts to mobilize grassroots support for Trump’s agenda. 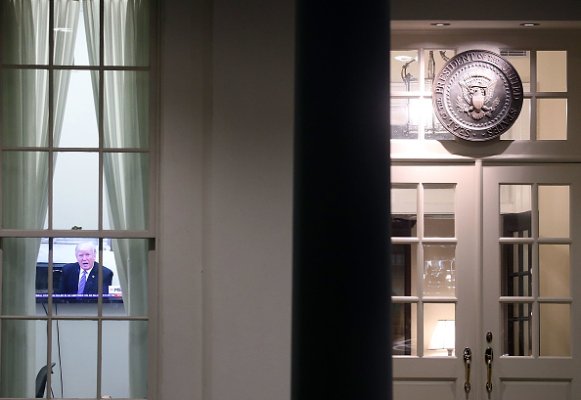 President Trump Argues That He Does Not Watch Much Television
Next Up: Editor's Pick