Suspect in Custody After 'Terror-Related Incident' in New York City

A 27-year-old male suspect, identified by authorities as Akayed Ullah, “intentionally” detonated an explosive device that was attached to his body about 7:20 a.m. at an underground walkway near the Times Square shuttle, according to NYPD Commissioner James O’Neill.

The suspect, who is in custody, was seriously injured in the blast and sustained burns and lacerations to his hands and abdomen, authorities said. He was allegedly wearing an improvised low-technology explosive device, but it’s unclear if he detonated it himself.

“This was an attempted terrorist attack,” Mayor Bill de Blasio said at a news conference Monday. “Thank God the perpetrator did not achieve his ultimate goals.”

The police commissioner also called the attack a “terror-related incident.”

Three bystanders were injured in the explosion, according to the New York City Fire Department, though none of the injuries are severe. Officials said they had ringing in their ears and headaches and were taken to hospitals.

The suspect has made “statements” about the explosion, but authorities did not say what the comments were.

There is no other immediate threat, according to the mayor. “This is the most resilient place on Earth,” he said. “We’ve proved it time and time again. The terrorists will not win.”

After the blast, hordes of people ran down Eighth Avenue, south of Port Authority, according to Freddy Oquendo, a 34-year-old lifelong New Yorker. Some were crying and others were calling their loved ones.

“It was pretty scary,” Oquendo said. “I just thought, not another situation again. I hope this stops happening.”

All subways that typically stop at the Port Authority are bypassing the station. Authorities temporarily closed the Port Authority Bus Terminal, a major transportation hub for New York City residents and visitors near Times Square, but it has since been reopened. More than a dozen train lines have been rerouted or suspended.

With additional reporting by Lucinda Shen and Jennifer Calfas

Most Popular on TIME
1
Chicago Mayor Says Looting Was Organized
2
Kamala Harris Is the Third Woman to Run as a Vice Presidential Candidate for a Major U.S. Party. Here's What to Know About the First
3
Kamala Harris and Beau Biden 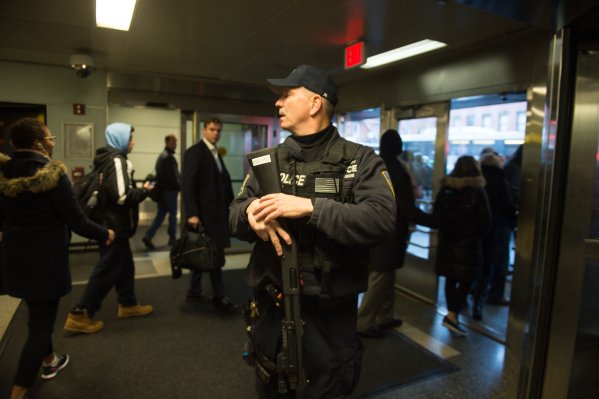