A Foot Has Been Found on the Beach in Canada. It's the 13th Such Discovery in a Decade

A dismembered foot washed ashore inside a shoe on a beach in British Columbia this week — the thirteenth such discovery on the same stretch of coast over the last decade, CNN reports.

The mysterious extremity was reportedly found by a man who was walking his dog.

“Our early analysis suggests these are human remains and we will do further investigation and testing,” said Andy Watson, a spokesman for the British Columbia Coroners Service, according to CNN.

The Coroners Service says the 12 feet found earlier all belonged to humans, and that eight of them have been identified.

The Royal Canadian Mounted Police (RCMP) and the Coroners Service are trying to identify the foot, the cause of death, and whether it matches any records for missing persons.

It is still unclear why dismembered feet keep turning up on the western coast, though Andy Watson of the Coroners Service was quoted by CNN saying there’s “no reason that [the cases] were connected in any way.” 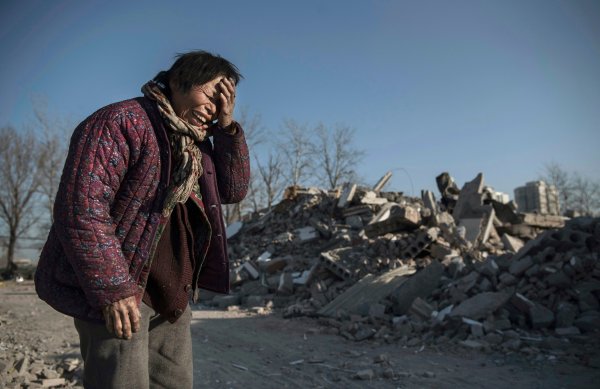 Forced Evictions in China Spark Rare Display of Dissent
Next Up: Editor's Pick