Final Four parties are super fun. The games are played on a Saturday night, so unlike, say, parties for the Super Bowl, you don’t have to worry about work in the morning. And they’re also a celebration of something more: the best few weeks of the sports calendar. College hoops is about to crown a champ, baseball’s getting into the swing of things, the Masters is coming up, the NBA playoffs are approaching, the NFL Draft is in the foreseeable future. It’s a good time to be a sport fan, tax season be damned.

So, to help prep for today’s big games — Florida vs. UConn at 6:09pm EST, and Wisconsin vs. Kentucky at 8:49pm, both on TBS — and celebrate your good sports fortune, TIME presents its inaugural Final Four drinking game. Enjoy, but please do so responsibly. Obey all local drinking age laws, don’t overindulge and take a cab ride home if need be.

Here are TIME’s rules for a Final Four drinking game:

1. The first time Florida’s Michael Frazier makes a three-point shot, imbibe. It shouldn’t take that long: Frazier can catch fire quickly. Against South Carolina in early March, Frazier sank a school-record 11 three-pointers: this season, he led the SEC in three-point percentage field goal percentage, shooting at a 44.7% clip. He also led the SEC in an even more important stat, true-shooting percentage, at 65.1% (true-shooting percentage is an efficiency measure that takes into account three-point field goals, two-point field goals, and foul shots). Frazier models his work ethic after Ray Allen, the NBA’s all-time leader in three-pointers: on game days, he’ll launch upwards of 400 shots to get in rhythm.

2. Every time you hear the word “student-athlete” in an NCAA commercial during the games, drink. The NCAA has a habit of running propaganda ads during big events, touting how the organization is like a spirit squad for “student-athletes,” has the backs of “student-athletes,” etc. Drink now, cause that term may soon be disappearing. According to the National Labor Relations Board in Chicago, “employees” is the more appropriate name for college athletes — at least for football players at Northwestern.

3. Every time UConn star Shabazz Napier makes an outside shot with a defender harassing him — the kind of shot that makes you say “noooo, what are you doing?” – and that shot goes in anyway, chug away. Napier’s an expert at making the “holy s–t” shot.

4. Choose which mascot TBS will show first in each game. Pick one, and drink if you’re correct. I’ve got Albert E. Gator and Bucky Badger.

6. For CBS, the Final Four has traditionally served as one big promo for its upcoming coverage of the Masters, which starts next week, on April 10. So even though the games are being broadcast on TBS this year, the networks are partners on NCAA tournament coverage. You’ll surely hear the soothing Masters piano – “ding, ding, ding, ding,” — that accompanies the Masters plugs. So each time you hear the Masters theme song, dream of azaleas and Amen Corner and all the mythical beauty of the Augusta National, and take a few soft sips. You’ll have a healthy buzz.

7. Sip every time TBS shows Wisconsin coach Bo Ryan scowling on the sideline. Like this. Or this. Ryan’s always been a first-class all-tournament scowler.

8. Kentucky has reached the Final Four with five freshman starters. Michigan, led by Chris Webber and Jalen Rose and Juwan Howard, was the last team to win this much with five rookies, back in 1992. That Michigan team was christened “The Fab Five.” So during Kentucky-Wisconsin, the first time you hear a “Fab Five” reference from one of the announcers, you know what to do.

9. Ever since the NBA set a rule in 2005 essentially mandating that players spend a year playing college ball before entering the pros, Kentucky coach John Calipari has done a better job than any coach in the country of recruiting a collection of talented freshmen, molding them in to a championship-caliber team, and shuttling them to the NBA. So the term “one-and-done” is now stuck to Calipari’s suit. When the TV cameras show Calipari, and someone says the words “one-and-done,” you will drink.

10. Wisconsin’s most intriguing player is seven-footer Frank Kaminsky. His game, and personality, are a little quirky: Kaminsky can fool you with his awkwardness, as he’s just as comfortable firing threes as he is posting up around the basket. And he was always a bit of a class clown, earning the nickname “Frank the Tank” a decade ago, in homage to Will Ferrell’s character in the movie Old School. So when someone mentions “Frank the Tank” on Saturday, you may have to pull a Frank the Tank yourself.

But seriously, be careful. Don’t end the night like the original Frank the Tank did. Because on Final Four Saturday, you don’t want to miss the drama. If we’re lucky, Florida-UConn and Wisconsin-Kentucky will treat us to two classics. Let’s all raise our glasses to that. 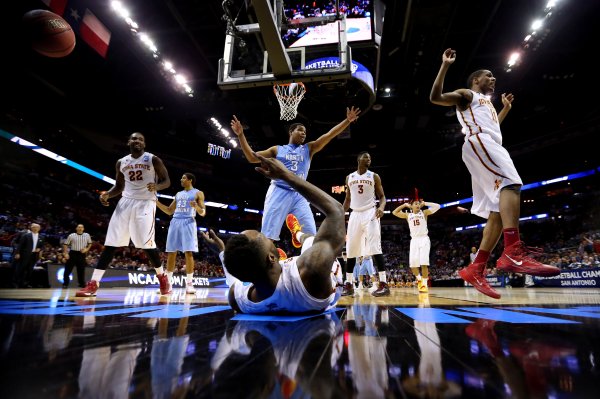