Jennifer Lawrence may often be considered America’s Sweetheart, but she’s got an entire plan laid out for when she finally meets President Donald Trump, and it looks like she’s been inspired by Katniss Everdeen‘s rebellious spirit.

In a new interview between the candid Mother! actress and mother of all interviewers Oprah Winfrey, the two screen personalities covered everything from Harvey Weinstein to Lawrence’s upcoming projects and nude photo hack. But things got especially heated when Winfrey mentioned Trump. After asking if Lawrence had an interest in meeting the President, Lawrence had a sharp comeback.

“I think so. I’ve got a pretty good speech. And it ends with a martini to the face,” Lawrence told Winfrey. “I have something to say for all of them. I watch different characters on the news, and I’m like, ‘You just wait.'” She continued: “Oh, my God, I’ve been waiting for this moment. I’ll give you a hint — it’s not nice. You wouldn’t want me to say it to you.” Looks like her position on the occupants of the White House is clearly a critical one.

The two were in conversation for The Hollywood Reporter, as Lawrence was receiving the Sherry Lansing Leadership Award, which Winfrey had also been honored with in the past. They’re now fast friends, too: they first hung out at a three-and-a-half hour chat session at Winfrey’s California estate, but have been texting and sharing book advice ever since.

“We drank rosé, and we laughed, and we talked about everything,” Winfrey said of meeting Lawrence. 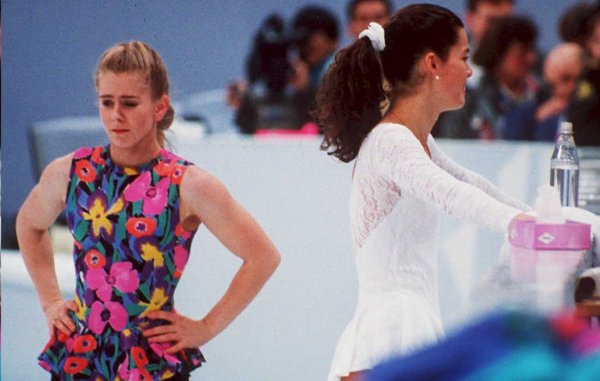 Tonya Harding and Nancy Kerrigan: Where Are the Former Skaters Now?
Next Up: Editor's Pick