When Senate Republicans voted by the narrowest of margins — 51 to 49 — to pass their sweeping tax overhaul after midnight last Friday, many of the bill’s critics turned their anger to Sen. Jeff Flake: the Arizona Republican who has taken a defiant stand against the populist ethos of the Age of Trump, only to decide at the eleventh hour to cast his ballot in favor of what’s been dubbed Trump’s tax bill.

Flake had been won over by two concessions from his party: a provision in the bill that reduced its impact on the federal deficit, and a verbal commitment from the White House to prioritize a legislative replacement for Deferred Action for Childhood Arrivals, the Obama-era executive policy canceled by Trump in September that protects young immigrants who arrived in the U.S. illegally. His willingness to believe an administration with which he has repeatedly clashed, some pundits said, was naive at best.

But in an interview with TIME on Wednesday, his first since Friday’s vote, Flake defended his decision. While conceding that the bill was less than perfect, he said that its emphasis on slashing corporate taxes would facilitate economic growth. He also condemned the notion that his “yes” vote nullified his past criticism of Trump — exemplified in an Oct. 24 Senate speech where he announced he would not seek reelection — as hollow or hypocritical.

“I saw a New York Times op-ed that said it was my responsibility, if I’m opposed to Trump’s policies or behavior, to ‘hobble’ him,” he said. “That’s never been the case. I’ve always said that I’ll work with the president when I think he’s right, and oppose him when he’s wrong.”

“People assume that anything Republicans in Congress do is Trump’s initiative,” he said. “But we’ve been working on tax reform for years! I’ve been pushing for lowering the corporate rate for well over a decade. This notion that it’s the president’s agenda that we’re fulfilling just doesn’t tell the story.”

The story, as it were, is more complicated. Flake is an ardent deficit hawk; in the dramatic days preceding the tax reform decision, speculation swirled on Capitol Hill around how he’d vote on a bill that by one official estimate would hike the deficit by $1 trillion over the next decade. Indeed, Flake had said that he was skeptical, citing the bill’s permission of “full expensing” — a measure that lets companies deduct their assets from their tax bills, costing the government billions in potential tax revenue. To fit within the budget limit, a previous draft of the bill had phased the measure out after five years — but Flake wasn’t convinced that would actually happen.

“Whenever that happens, we never end it,” he said, pointing to the so-called “doc fix” that until 2015 reimbursed medical providers to the tune of hundreds of billions of dollars. “Businesses will come — just as physicians and hospitals came and said ‘no, you can’t do that,’ and so we extended it for almost twenty years.”

Flake fought hard against the full expensing provision, and in the end he secured a compromise: after the five-year limit, it would sunset out gradually over the following four years, to preempt the ire of businesses that would otherwise swiftly lose a beneficial tax loophole. “We said, smooth that, ramp it down after the first five years, and they were able to do that,” Flake said.

“I am concerned about the debt and deficit,” he concedes. “I’ve always described myself as a supply-sider with caveats. Basically it was about trying to get a balance I could live with. And I think we got it.”

With the bill’s fate still uncertain on the eve of the vote, Flake saw an additional opportunity to wield his leverage: to insist that, in exchange for his support, the White House and congressional Republican leadership would focus on passing a legislative replacement for DACA. Flake’s moderate stance on immigration has long set him at odds with Trump, who voided Obama’s amnesty program in September. Flake has since been frustrated by Congress’ inaction to pass legislation that would protect around 800,000 beneficiaries from deportation before the program officially expires in March. “I just think it’s unfair to those kids to make them wait for this long,” he said.

On Thursday and Friday of last week, Flake says he spoke twice and at length to Vice-President Mike Pence.

“I’ve always thought that the president’s instincts on DACA — and I don’t say this about every area where the president has policy preferences — are better than the advice that he gets,” Flake said. “They want this done, and frankly, I was telling [Pence]: hey, you guys need an excuse. ‘We have a Republican Senator whose vote we can get if we agree with DACA’ — use it however you want!”

The verbal commitment, Flake says, amounts to “an iron-clad guarantee that we’ll get it done by this date.” It gives traction to his behind-the-scenes efforts — he has assembled a bipartisan Senate bloc to pursue legislation, with six members and counting — and, he says, assures his spot at the negotiating table. “The bottom line here, and the reason that I’m at the table, is that we need 60 votes,” Flake says. “And in order to get that, it’s got to be bipartisan. We’re going to have to involve those who are serious about it on the right, like me, to get some of those on the left.”

Some are skeptical of this deal’s fortitude, citing the September meeting where Trump and congressional Democratic leaders Chuck Schumer and Nancy Pelosi reached a compromise to replace DACA — a compromise that, three months later, has amounted to little more than smoke.

But Flake says he has Republican prudence on his side. “The [March] deadline — we’re going to come up on that pretty soon,” he says. “Nobody wants to go over those falls. That’s not in our interest.”

Flake is aware of the criticism that has come his way in the wake of his vote. On Tuesday night, he tweeted a photo of a $100 check he had written for Democrat Doug Jones, who is running in Alabama’s Senate special election against the controversial Roy Moore. Flake was criticizing Moore even before allegations emerged last month that the far-right Alabama judge had pursued teen-aged girls sexually; now, with the election one week away, Flake says he wanted to “make a statement, at least.”

“Country over party,” Flake tweeted with the photo.

“Okay then vote against the abhorrent tax bill, big spender,” one person snarked back.

But as Flake sees it, the expectation that he counteract Trump’s agenda simply to validate his criticism of the president is not only misguided — it also evinces the crude partisan polemic that he says has characterized contemporary political discourse.

“We’ll push back those areas where our agenda is different from his,” he says. “But this notion that it’s my responsibility, because I’m opposed to what a lot of the president is doing, to ‘hobble’ him — it smacks of the same disdain that Democrats had when McConnell made the statement that it was our responsibility to make sure that Obama was a one-term president. That wasn’t right, nor is this. I don’t see it that way.” 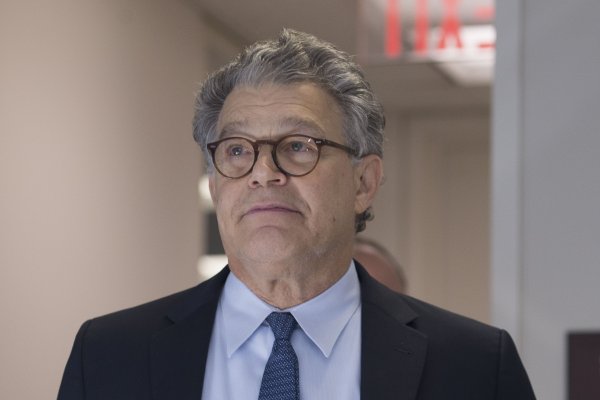 Franken Expected to Resign After Democrats Turn
Next Up: Editor's Pick