Sen. Al Franken Expected to Resign Thursday – as 23 Democrats Turn on Him

Democratic Sen. Ron Wyden of Oregon said he expects Sen. Al Franken to resign on Thursday as at least 23 of the Minnesota Democrat’s colleagues called for him to step down. The calls came as another woman, a former Democratic congressional aide, accused Franken of trying to forcibly kiss her in 2006.

“I expect that Senator Franken will announce his resignation tomorrow,” Wyden said in a tweet. “It is the right thing to do given this series of serious allegations.”

The calls for Franken to resign were sparked by a group of Senate Democratic women who came out nearly simultaneously on Wednesday urging him to leave the Senate. Franken, who has been accused of groping and forcibly kissing a number of women, responded by saying that he would make an announcement Thursday.

“While Senator Franken is entitled to have the Ethics Committee conclude its review, I believe it would be better for our country if he sent a clear message that any kind of mistreatment of women in our society isn’t acceptable by stepping aside to let someone else serve,” Sen. Kirsten Gillibrand wrote in a lengthy Facebook post earlier on Wednesday.

Throughout the afternoon, calls for his resignation only continued to grow. Senate Majority Leader Mitch McConnell said in a statement on Wednesday that while the Senate Ethics Committee is currently investigating Franken, “it now appears Senator Franken has lost the support of his colleagues, and most importantly, his constituents.” McConnell continued, “I do not believe he can effectively serve the people of Minnesota in the U.S. Senate any longer.”

Notably, Franken’s fellow Minnesota Sen. Amy Klobuchar was not among those calling for his resignation on Wednesday afternoon. Instead, her office released a statement indicating that the two had spoken earlier that day. “Senator Klobuchar personally spoke with Senator Franken this morning,” the statement from Ben Hill, Klobuchar’s Minnesota State Director, read. “As has been reported, he will be making an announcement tomorrow morning.”

The floodgates were opened by the a group of Democratic women in the Senate including Gillibrand, Claire McCaskill of Missouri, Kamala Harris of California, Patty Murray of Washington, Tammy Baldwin of Wisconsin, Mazie Hirono of Hawaii and Maggie Hassan of New Hampshire, who led the calls for Franken to resign.

According to a Democratic aide, women in the Senate have been in contact for a while about what Sen. Franken’s path forward should be. But on Wednesday, they decided that enough was enough. It was time to call on him to step aside.

“I’ve struggled with this decision because he’s been a good Senator and I consider him a friend,” Hawaii Sen. Mazie Hirono said of Franken in a statement issued late Wednesday morning. “But that cannot excuse his behavior and his mistreatment of women.”

Sens. Maggie Hassan of New Hampshire and Kamala Harris of California joined in, too.

As did more of their colleagues.

By noon, their male colleague had begun to express similar sentiments. Sens. Joe Donnelly of Indiana, Bob Casey of Pennsylvania and Sherrod Brown of Ohio released statements calling for Franken’s resignation, as did the chairman of the Democratic National Committee Tom Perez.

“I agree with my colleagues who have stepped forward today and called on Senator Franken to resign. We can’t just believe women when it’s convenient,” Casey tweeted.

“I have listened to them. I have listened to my female colleagues, to women I work with and women in my life. And I agree the time has come for Senator Franken to step aside,” wrote Brown, who also said he the Senate Ethics Committee should continue to investigate Franken.

“He is entitled to the investigation. And their findings will be important to informing changes that are needed in Congress,” Brown wrote.

Perez tweeted: “Sen. Al Franken should step down. Everyone must share the responsibility of building a culture of trust and respect for women in every industry and workplace, and that includes our party.”

Sens. Debbie Stabenow of Michigan and Heidi Heitkamp of North Dakota also weighed in.”Sexual harassment is unacceptable. I believe Senator Franken should do the right thing and resign,” Stabenow said.

Sens. Maria Cantwell of Washington, Dianne Feinstein of California, Patrick Leahy of Vermont, Dick Durbin of Illinois, Ed Markey of Massachusetts, Jeff Merkley of Oregon, among others, have also called for his resignation.

The flurry of statements came at a pivotal moment in the country and the Congress. A groundswell of women across the U.S. have begun speaking out in unison to call attention to their own experiences with sexual harassment and assault and to hold perpetrators accountable.

The women honored as TIME’s 2017 Person of the Year have been among those leading the charge. Hirono cited the TIME choice, which was announced earlier on Wednesday, in her statement. Several members of Congress have been among the accused; on Tuesday, Democratic Rep. John Conyers retired from the House of Representatives as more women opened up about sexual harassment they said they experienced at his hands.

In her Facebook post, Gillibrand said said the current “moment of reckoning” is bigger than ” any one industry, any one party, or any one person.”

“The pervasiveness of sexual harassment and the experience women face every day across America within the existing power structure of society has finally come out of the shadows. It is a moment that we as a country cannot afford to ignore,” she wrote.

The calls for Franken’s resignation came as another woman, a former Democratic congressional aide, came forward and accused him of forcibly kissing her in 2006. The woman claims Franken told her it was his “right as an entertainer” after she rejected his assault. Franken denied the allegation telling Politico in a statement: “This allegation is categorically not true and the idea that I would claim this as my right as an entertainer is preposterous. I look forward to fully cooperating with the ongoing ethics committee investigation.”

The Senate Ethics Committee has opened an investigation into Franken. 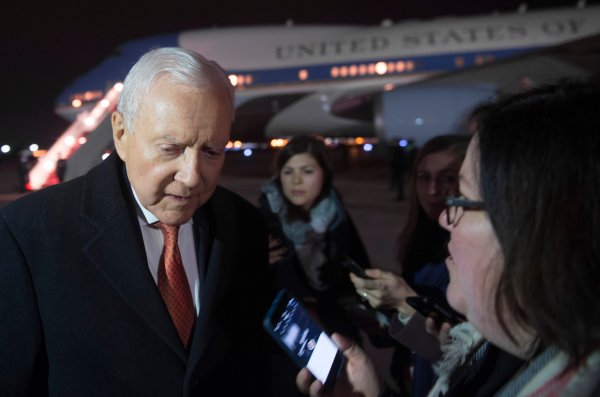