Megyn Kelly's Message to Women Facing Sexual Harassment: 'You Are Not Alone'

NBC anchor Megyn Kelly sent a heartfelt message Wednesday to women who may feel powerless against men who have abused them amid what she called a “watershed moment in history,” in which thousands of people across the world are speaking out about their experiences of sexual harassment and assault.

Speaking after TIME revealed “The Silence Breakers” as the 2017 Person of the Year, Kelly directly addressed her talk show viewers who have been victims of sexual misconduct. She told those who are are not yet comfortable sharing their stories that they still have the support of all the women who have already come forward.

“You are not alone. We are all there with you,” said Kelly, a former Fox News anchor who spoke out earlier this year about Bill O’Reilly’s alleged sexual misconduct. “There truly is safety in numbers.”

Earlier Wednesday, TIME revealed its Person of the Year as the people around the world who had shared their experiences of sexual assault and harassment, including those who did so as part of the #MeToo movement.

Kelly said the thousands of people who have spoken out are “leading the charge to a safer, more secure and shame-free existence” for victims of sexual misconduct. “They are not in the shadows any longer,” she said. “They have broken the silence.”

On her talk show Wednesday, Kelly was joined by actor Alyssa Milano, who moved thousands of women to speak out with a tweet, #MeToo movement creator Tarana Burke, and six other female accusers, including journalist and Mark Halperin accuser Lara Setrakian.

“It’s really sad for me just to know that so many women hurt from this pain, but I’m also hopeful that this collective ache can really bring about something that is meaningful and powerful and that we can change,” Milano said.

Milano popularized the #MeToo movement — which was started a decade ago by activist Tarana Burke — in October when she posted a tweet urging every woman who had ever been sexually harassed or assaulted to write “me too” on social media. More than 1.7 million people immediately spoke out about their own harassment experiences in response, Milano said.

“I was so overwhelmed, I burst into tears,” she said.

Kelly and the panel of women on Wednesday said they were encouraged by how quickly the #MeToo movement grew in just two months. While they agreed it was disheartening to see the scope of the problem in the stories of the many women who have come forward, Setrakian said the candor has created a bond between those who shared their experiences.

“The silver lining is that we all found each other,” Setrakian said. 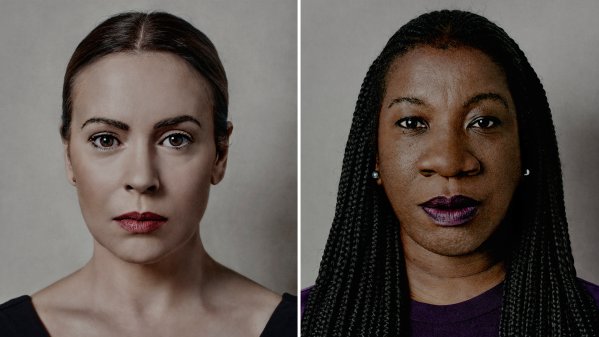 'Now the Work Really Begins.' Alyssa Milano and Tarana Burke on What’s Next for the #MeToo Movement
Next Up: Editor's Pick