Trump Is About to Make a Big Announcement About Jerusalem. Catch Up on What You Need to Know and Watch It Live

President Donald Trump is expected to announce a major change in American policy in the Middle East on Wednesday by formally recognizing Jerusalem as the capital of Israel, according to U.S. and other officials.

The move will set in motion a multi-year process of moving the American embassy from Tel Aviv to Jerusalem, which is also claimed by the Palestinians as the capital of a future Palestinian state. Making Jerusalem the capital of Israel would amount to a seismic shift after decades of U.S.-led diplomatic efforts that left the final status of Jerusalem up for negotiation between the Israelis and the Palestinians. It could derail the prospect of fresh peace talks just as Jared Kushner, Trump’s son-in-law, is pursuing them. And officials across the world fear it could ignite violence.

Trump’s Jerusalem announcement is scheduled for 1 p.m. E.T. at the White House. You can watch it live right here.

In the meantime, here’s a brief history of Jerusalem and what to expect next.

Some people already recognize Jerusalem as the capital of Israel

Jerusalem is an ancient city that sits in the center of the intractable Israeli-Palestinian conflict, home to sites that are holy to Jews, Muslims and Christians.

Both the Israelis and the Palestinians call Jerusalem their capital. For years the city was divided between Israeli and Jordanian control, until Israel captured East Jerusalem during the 1967 war. But the international community has never recognized Israel’s sovereignty over the entirety of Jerusalem, and peace talks have repeatedly stumbled over a final status agreement for the city.

Moving the U.S. embassy back to Jerusalem is controversial

Control of Jerusalem is central to any peace deal that could be reached between the Israelis and the Palestinians.

In 1995, President Bill Clinton enacted the Jerusalem Embassy Act, which pledged that the U.S would move its mission in Israel to Jerusalem unless the President determined that doing so would threaten American national security interests. Since its enactment, every president has determined, every six months, that moving the embassy would constitute such a threat.

Moving the American embassy to Jerusalem has long been sought by conservative evangelical Christians who value support for Israel and by other Republican constituencies, and Trump often pledged during his campaign to do so.

With the exception of Israeli Prime Minister Benjamin Netanyahu, most are not pleased. By and large, leaders in the Arab world view making Jerusalem the capital of Israel as an affront, and Western heads of state mostly support that view.

Palestinian President Mahmoud Abbas warned of “dangerous consequences,” according to a spokesman cited by Haaretz. The spokesman added that “the Palestinian stance is determined and steadfast — there will not be a Palestinian state without East Jerusalem as its capital according to decisions by the international community.”

French President Emmanuel Macron pleaded with the Trump Administration to leave the business of determining Jerusalem’s status to peace talks. Jordan’s King Abdullah II warned against “pre-empting a comprehensive solution that leads to the establishment of a Palestinian state.”

What to expect after Trump’s Jerusalem announcement

In the short term, Trump is expected to renew the six-month waiver that keeps the U.S. embassy in Tel Aviv, though U.S. officials have said his announcement will be followed by instructions to the State Department to begin preparing for the move.

But many in the Arab world have warned that any such shift would be viewed as an act of aggression and could have repercussions for both diplomacy and security. The U.S. State Department has been advised to prepare for potentially violent protests at American embassies and consulates following the announcement.

Correction: The original version of this story misstated who controlled Jerusalem before the 1967 war. The city was divided between Israeli and Jordanian control, not Israeli and Palestinian control. 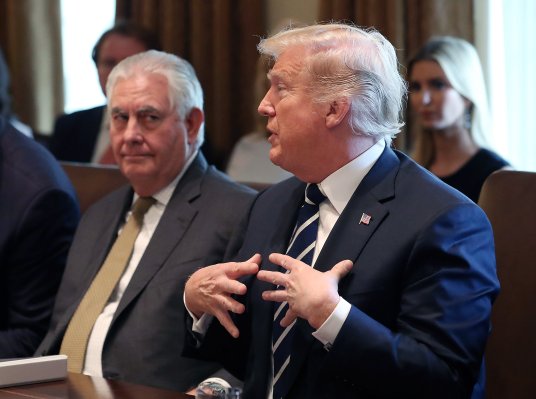 Rex Tillerson Could Become One of the Shortest-Serving Secretaries of State
Next Up: Editor's Pick