The Thomas Fire, which started near Highway 150 around 6:30 p.m. on Monday night, continues to make its way toward Highway 33, Ventura County officials reported, with some 500 firefighters currently trying to battle its flames.

Thousands of people have already been forced to evacuate their homes, with Ventura County’s officials estimating the fire has already spread 31,000 acres since it began on Monday night because of the Santa Ana winds.

At least 27,000 residents have already been evacuated in Santa Paula, Ojai, and Ventura, fire officials told ABC, while entire structures like the Visa del Mar Hospital have completely collapsed under the flames.

Some 20,000 residents were also facing power outages in Ventura County Tuesday morning. Oxnard, Ventura, Camarillo are all suffering a loss of electricity, according to ABC.

The Thomas Fire continues to remain “out of control” due to the high winds, officials said Tuesday. A map from state and local fire officials shows where fires continues to burn.

Fire crews were planning to use fixed wing aircraft and helicopters to tackle the fire at daybreak Tuesday because the fire’s intensity is making it difficult for crew to battle it on the ground.

“The prospects for containment are not good,” Ventura County Fire Chief Mike Lorenzen said at a news conference Tuesday morning. “Really, Mother Nature is going to decide if we have the ability to put it out because it is pushing hard.”

The fire comes just months after California’s wine country was ravaged by numerous wildfires that killed more than 40 people and destroyed thousands of structures. 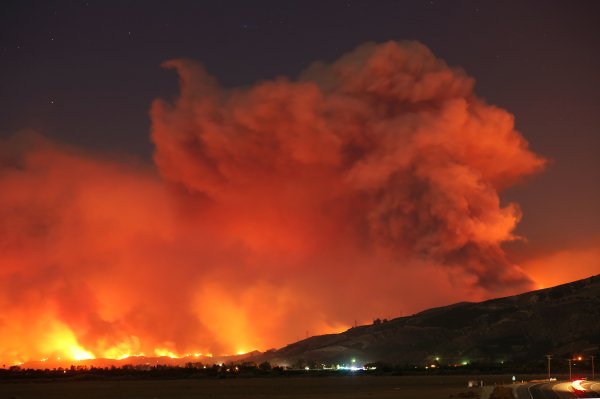 Wildfire Tears Through California
Next Up: Editor's Pick