Democrats Plan to Take the Next Step Towards Impeaching Donald Trump

President Donald Trump speaks during a meeting with Republican members of Congress in the Roosevelt Room of the White House on Dec. 5, 2017 in Washington, D.C.
Win McNamee/Getty Images
By Katie Reilly

Texas Rep. Al Green said Tuesday that he will bring articles of impeachment against President Trump to a vote on Wednesday, the latest step in an impeachment effort that does not yet have broad Democratic support and is unlikely to succeed in the Republican-led House.

“Tomorrow we will bring Articles of Impeachment to the floor of the Congress of the United States of America for a vote,” Green said Tuesday morning on the House floor, announcing that “three prominent Democrats” have asked to meet with him to discuss impeachment.

A handful of Democrats introduced articles of impeachment against Trump in November, the first official step in the process. They accused him of obstructing justice, violating the Constitution’s foreign and domestic emoluments clause, undermining the federal judiciary system and threatening the freedom of the press.

But the process of impeaching an American president and removing him from office is complex and challenging. Most top Democrats have dismissed talk of impeachment. House Minority Leader Nancy Pelosi said last month that impeaching Trump would be a waste of time and energy, according to those who attended her event at Hearst. Earlier in November, she told CNN that “it’s not someplace that I think we should go,” when asked about impeachment proceedings.

“There may be a time. It is premature. And to call for [impeachment] now you might blow your shot when it has a better chance of happening,” he said, according to the Daily Beast. “It is serious, serious, serious. And so… [pause]… you wait.” 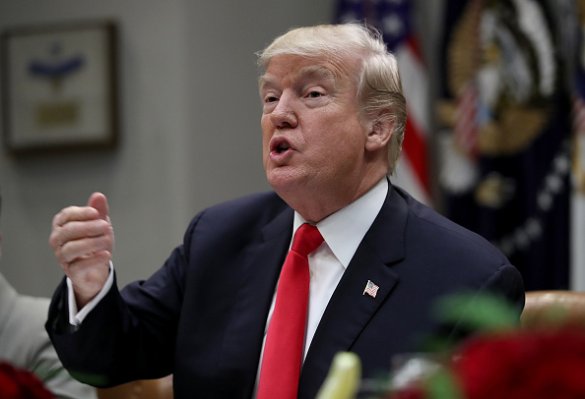 President Trump Called the Republican Tax Plan 'So Popular.' Polls Show It's Not
Next Up: Editor's Pick