These Are the Best Places to Travel in 2018

A new year is approaching, which means it’s time to start crossing off a few more destinations off your travel bucket list.

Countries like Iceland and Portugal dominated travel trends in recent years, but there are some fresh offerings that could become 2018’s “it” destination. Travel + Leisure has revealed its list of the best 50 places to visit in 2018, which features some of the most exciting and beautiful places around the world.

Here is a snapshot of 10 destinations Travel + Leisure recommends considering for a 2018 adventure. For the full list, check out Travel and Leisure‘s 50 places to visit in 2018.

The allure of the Danish capital is no secret, as travel to the city has increased by more than 80% over the past decade, according to Travel + Leisure. But that doesn’t mean Copenhagen has already been discovered, as a host of new dining and drink options have opened in recent months, the magazine reports. Apollo Bar & Kantine looks particularly enticing as a showcase of the “New Nordic” food, beverage and design movement.

This remote island nation off the east coast of Africa hasn’t been a traditional destination for U.S. travelers because of its isolation, but a number of airlines began service to Mauritius at the tail end of 2017, according to Travel and Leisure. That means more visitors can start enjoying the country’s luscious Indian Ocean beaches along with the hospitality and seafood cuisine of Mauritius’ hotels and resorts.

The cultural hub in the heart of the north African country is in the midst of an artistic renaissance, according to Travel and Leisure. The opening of the YSL Museum (dedicated entirely to the work of legendary fashion designer Yves Saint Laurent) and the upcoming launch of a high-profile African art fair have added to the city’s prominent gallery spaces, doubling down on the Marrakesh’s historic reputation as a haven for artists and writers.

The Caribbean paradise has even more to offer thanks a number of new resort offerings, Travel + Leisure reports. A multibillion-dollar hotel and casino on Nassau’s Cable Beach will be fully operational by this spring, according to the magazine. But you don’t need to remain in the capital to experience luxury. Head over to the neighboring Paradise Island to stay at the famed Ocean Club resort, which is now under the management of Four Seasons.

New Orleans has rejuvenated itself since the 2005 devastation of Hurricane Katrina with investment in the arts, dining and hospitality. The Central Business District — which for years was solely just that — now boasts four new hotels, each with equipped with a rooftop bar. Tourists and residents alike can stumble into citywide art shows, according to Travel and Leisure, and Mardi Gras remains as big an event as ever. But perhaps most tempting is New Orleans eclectic mix of creole and cajun-fusion dining options.

Tourism took a hit after Egypt’s 2011 political revolution, as the amount of visitors to storied landmarks like the Pyramids and Great Sphinx of Giza declined. But, Travel + Leisure notes, there is entirely new landmark that should draw plenty of visitors in 2018. The Grand Egyptian Museum will partially open in the upcoming year and eventually showcase more than 100,000 ancient artifacts from Egypt’s legendary pharaohs. The building itself looks worth visiting on its own, encapsulating almost 650,000 square feet and a light-soaked atrium.

A beach at sunset in Fiji
Getty Images

If you somehow needed convincing before to experience Fiji’s crystal clear beaches, now consider the crop of luxury resorts that have opened on the island or are about to in 2018. Private islands, beaches, villas, and more are available if you’re willing to pay the price. Next year, Nihi Fiji — a resort from hoteliers James McBride and Christopher Burch — will open on the island. McBride and Burch also opened Nihi Sumba Island, which Travel + Leisure readers named the world’s best hotel in 2017.

The Archipelago Sea, an extension of the Baltic, contains the largest archipelago in the world, with estimates hovering around 50,000 islands. They are a popular travel destination for native Finns, but often overlooked by outsiders. Norwegian Air has the potential to change that, however, with new transatlantic flights starting around $350, according to Travel + Leisure. When not island-hopping, check out the nearby mainland center of Turku, which served as Finland’s capital in medieval times and still remains a cultural hub.

Homes on the island of Uummannaq, Greenland
Getty Images

While Iceland emerged in the last few years as one of Europe’s best kept secrets, it may be time to turn the attention to the country’s neighbor. Greenland’s hospitality industry is pushing into its chilly tundras with the development of eco-lodges that allow visitors to stay warm in between outdoor excursions exploring the wilderness and whale-watching, Travel + Leisure reports. Worth checking out is Camp Kiattua for an upscale experience that remains humble with tipi-esque tens and roaring fireplaces.

A hidden bay on the island of Solta, Croatia
Getty Images

Croatia is a nature-lovers dream with crystalline waters and breathtaking scenery. The island of Šolta is no different, but tourists had difficulty experiencing in the past due to a lack of transportation. That has changed thanks to the spread of UberBOAT, an app from the ride-sharing company that currently exists only in Croatia. Now visitors can ferry to the island on-demand and take in the beach clubs, medieval villages, and local wines. 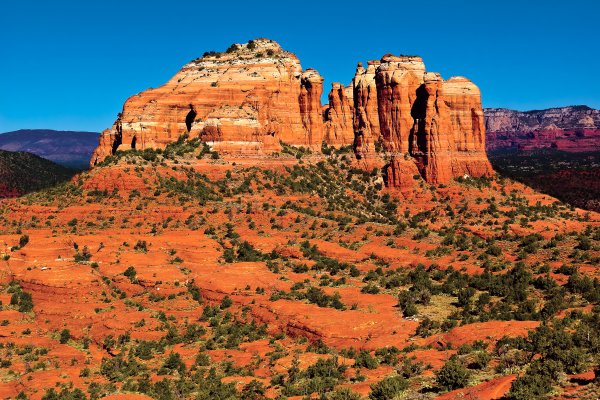