WASHINGTON, DC - MAY 15: U.S. Transportation Secretary Elaine Chao delivers remarks during the U.S. Chamber of Commerce's 'Infrastructure Week' program May 15, 2017 in Washington, DC. Chao highlighted the repair of the I-85 Atlanta highway bridge that collapsed March 30 as an example of public-private work that helped repair the damage in record time. (Photo by Chip Somodevilla/Getty Images)
Chip Somodevilla—Getty Images
By Maya Rhodan

Secretary of Transportation Elaine Chao said Tuesday that she had experienced sexual harassment in the workplace at some point in her career, but said women cannot let those experiences define them.

“I think that’s a dirty little secret that a lot of women have held for a long time. Many of us, especially I think in years past have experienced it,” Chao said during an interview at Politico’s Women Rule Summit. “But the environment was very different.”

Chao did not share details of her experience, as many women have done in the wake of the Harvey Weinstein allegations, because the person was “still around” and, she said, because it’s not worth it.

“Things change, times change and it’s not worth my while to go back and revisit those negative moments,” she said. Chao took the moment to express to the crowd that it is her hope that other women who face challenges in life overcome them.

“You will go through difficulties in your life and I hope you will all triumph. And when you triumph you need to help others along the way, but you also must have magnanimity of spirit,” she said. “I will fight for other women and I will stand up for other women, but of your own, you gotta let it go. Because otherwise it’s too corrosive, it’s too negative and it does you a double injury because it holds you back.”

Chao spoke at a time when allegations of sexual harassment in the workplace have shaken Washington in a way that hasn’t been seen in some time. Several women have come forward with accusations against members of Congress, including longtime Rep. John Conyers, who announced his retirement from the House of Representatives on Tuesday amid calls to resign. And last week, more than 200 women in the national security community signed on to an open letter on sexual harassment. 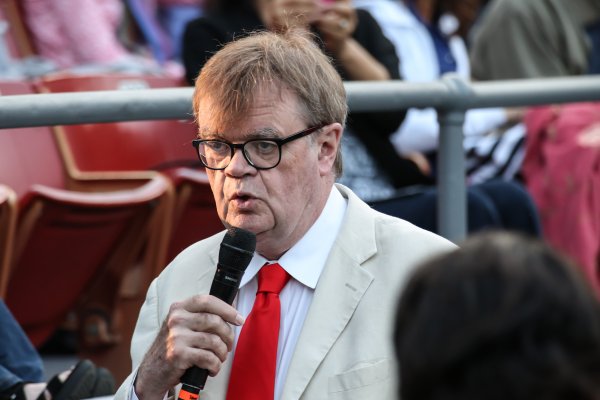