When dozens of women came forward with sexual assault and harassment allegations against Harvey Weinstein—who has continued to deny all allegations of non-consensual sex—actor Terry Crews noticed that some people on Twitter were skeptical. Crews knows from personal experience how hard it is to experience harassment and muster the courage to speak out: He says he was groped by William Morris Endeavor agent Adam Venit at an industry event in front of his wife. The agency said they suspended and demoted Venit, who declined to comment for this article. He has since returned to work. Crews is now suing Venit and the agency for sexual assault.

Crews—who was recognized as one of the Silence Breakers, TIME’s Person of the Year—realized that men had a responsibility to lend credence and support to these women’s claims. Almost without thinking through the consequences, Crews tweeted out his own story; in his viral series of tweets, he became one of the first men to join the chorus of women speaking out about harassment.

Crews spoke to TIME about the reception to his story and why it’s imperative that men advocate for women’s rights.

What was the moment you decided to speak out about what happened to you?

I’d actually just read a comment someone made on Twitter about one of Weinstein’s accusers. It went something like: She’s just looking for attention and a payday. It really affected me. I couldn’t stop thinking about it. I remember going to my phone and I started writing. And I couldn’t stop. What it became was this sixteen-tweet missive from me. I just remember having to say what I felt. I was really angry because these women were being discounted. These women were being discarded. Their pain was just—it was nothing. I wanted to join in. I wanted to say something. I wanted to support. But I did have to let these women know they weren’t alone. And that I understood. My whole mission was to give them strength. Don’t accept the shame that people are giving you. Because that’s what it was. They were being shamed. They were being victimized again. I just couldn’t stand for it.

In a matter of hours it had become the #1 trending topic on Twitter. And I had a realization: I didn’t check with my wife, I didn’t check with my publicist, I didn’t check with anybody. I just did it. But at that moment, I was free. Until men stand up and say, “This harassment, this abuse, these assaults are wrong,” nothing will change. If I was silent, it would mean I’m consenting to all of it. I always have felt women have been able to take care of themselves, 100%. But men need to hold other men accountable. That’s my thing. I came up in the cult of masculinity, in football and the sports world and entertainment. You’re in places and guys are saying the wildest thing. People need to be called on that. You need to be held accountable for the things you say, the things you do. What it came from is literally a belief that as a man you are more valuable than a woman. The reason I have the authority to say it is because I was like it. I truly believed I was more valuable than my wife and kids. Until I had a major paradigm shift in my own life—it was like I hit rock bottom in order for me to see that I had it all wrong.

I’m here to tell you it’s not your fault. It’s not. What happened to me was a prime example. People were saying, “You should have beat him up.” I’m like, “Why is no one questioning him?” No one questions the predator. The person who is doing the harassment doesn’t even get a question. You know why? Because they just expect it. And I said, “No more.” Why are you questioning the victim here? Let’s flip it.

What would you say to people who think this is becoming a witch hunt?

Hollywood was so far into the fact that everyone thought this behavior is normal. It needs to swing all the way back. What we need is a reset. People say, “Oh, it’s a witch hunt. People could lie.” You know what? First of all, the thread of that is going to keep people right. We need to know you can’t do it. If it’s not a witch, it’s a witch hunt. If there are actual witches there, we need to stop them. I have people coming to me saying, “Hey, man. You could ruin this guy’s life.” Very clever. That’s a very clever thing to say. But he ruined it when he did it. All these people need to be disciplined into knowing what is acceptable and what isn’t. The only way to do that is by holding people accountable every time. This is something that gives my life meaning. There’s no reason why—why should I be the guy to survive Flint, Michigan; survive forty-nine years on this Earth; married twenty-eight years with five kids, the whole thing—and then I just sit in my big house and relax. This gives my life meaning. Now I know why I was put here. Let me tell you—the guy who messed with me messed with the wrong guy.

Is Hollywood a microcosm for how power is imbalanced in the rest of the world?

I believe that. It is in every field, in every business, in sports, in politics. It’s bipartisan. It’s not Democratic, it’s not Republican, it’s not Russian, it’s not American, it’s not black, it’s not white. Because I am an African-American man, I’ve been just as vocal about the abuses in my own community. The pimp culture, where guys are praised for having two or three girls. I’ve been to the rally for civil rights, and they will look at a woman and say, “Bitch, sit down.” And you’re like, “Wait a minute—this is civil rights here.” When it’s like, as a black man, I’m equal to a white man, but they don’t believe that a man is equal to a woman. Self-defeating. Self-destructive. How are you going to get justice, and you aren’t even treating the women in your circle with justice? If you’re a Democrat, you can’t gloss over your own problems of the people in your party. If you’re a Republican, you can’t gloss over those problems in your party. If you’re American, you can’t say just because I’m an American, let’s gloss over that stuff. And sometimes you’ve got to be willing to walk alone. I get most of my courage from my wife. When I went through my trauma, she was right there with me. I’m very thankful to have a wise woman on my team. 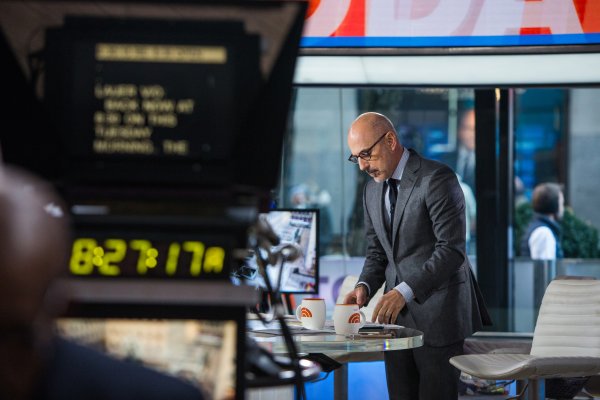 Matt Lauer Is 'Broken and Ashamed' Over Firing
Next Up: Editor's Pick