Behind the Scenes of TIME's Person of the Year 2017

Each year, we begin the process of choosing the Person of the Year—this is the 91st time we have done so—with a late-September meeting of the staff. The nominations are varied and the debates vigorous, never more so than in this moment of extreme disruption. Nearly one year in, President Trump has dramatically changed the way the Executive Branch functions and altered U.S. relationships with allies and adversaries. Chinese President Xi Jinping, having consolidated internal power to a degree not seen since Deng Xiaoping, made clear that his country is prepared to assume the mantle of world leadership. Kim Jong Un, the mysterious totalitarian leader of North Korea, escalated global tensions by testing increasingly powerful missiles, the latest capable of reaching Washington.

Then, on Oct. 31, I walked into a windowless conference room we call “the bunker,” where Eliana Dockterman and Haley Sweetland Edwards had been reporting on women who had come forward during the year with personal stories of sexual harassment and assault. Spread across a 12-by-5-ft. table were the results of their work: scores of small rectangular pieces of paper, each listing the names of accusers, their job sectors and their stories. This was more than three weeks before the Charlie Rose and Matt Lauer cases became public, but already it was apparent that this story had a velocity and scale beyond anything else that we had seen. Barring major news developments in the last weeks of the year, this would be our choice.

Guided by deputy editor Kira Pollack and Susanna Schrobsdorff, the reporting team expanded to include writers Stephanie Zacharek and Charlotte Alter; West Coast editor Sam Lansky; video producers Spencer Bakalar, Diane Tsai and Julia Lull; and photo editor Kara Milstein. For the portraits, we commissioned the Berlin-based photographers Billy & Hells, whose work conveyed the emotional resonance and power we were seeking for the package. The shoots were expertly overseen by senior producer Tara Johnson. The issue was designed by Chelsea Kardokus, with Victor Williams. The digital experience was created by David Kofahl.

The impresario of the Person of the Year franchise is assistant managing editor Ben Goldberger, who notes that this year represents something of a departure. “Often the choice reflects institutional power—Presidents, Prime Ministers, Popes,” Ben says. “This year is an important reminder that the world can also be transformed from the ground up.” 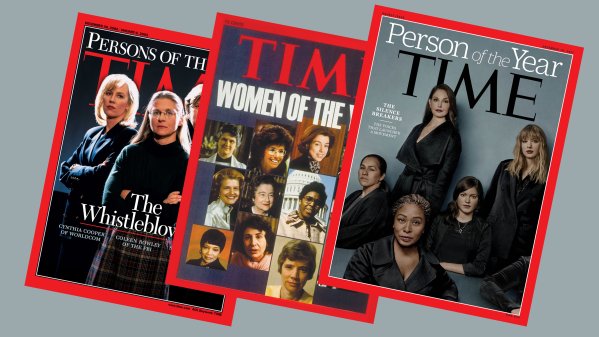 What It Means When TIME's Person of the Year Is a Group
Next Up: Editor's Pick