For the cover of TIME’s 2017 Person of the Year, we commissioned the photographer team known as Billy & Hells to make a group portrait of “The Silence Breakers”—women whose individual acts of courage have led to the biggest cultural reckoning we’ve seen in decades. The voices of the women on our cover—Ashley Judd, Susan Fowler, Adama Iwu, Taylor Swift, Isabel Pascual*—along with hundreds of others and many men, have confronted power with truth.

“It was an incredible honor for us to portray this subject,” says Anke Linz, one half of the Berlin based photographer duo. TIME chose the team because they make emotional portraits that convey a quiet poetry coupled with a resounding dignity. “It takes so much courage to go in front of a camera, especially in light of this story,” says Linz. “It was important for us to portray the subjects’ inner strength and spirit.”

The cover shoots took place in two locations—Los Angeles and San Francisco—and the final image was a composite. It was the first time any of the subjects had met, and they shared a few tears with each other as well as their stories. “It was touching to see all these different women in this short window of time particularly loaded with such an emotional background,” said Linz. “Our challenge for the cover was to make a group portrait, in which each person is an individual and reflects her own individual character,” says Andreas Oettinger, the other half of Billy & Hells. “This was our goal with the composition, that we convey the correct proportions from one person to the next. It was each individual voice and own unique story that added to the ultimate amplification!”

Beyond the cover image, Billy & Hells created a series of 24 photographs in New York City, San Francisco and Los Angeles over a 10 day period. Each portrait sitting was followed by individual video interviews conducted by Eliana Dockterman, Haley Sweetland Edwards and other members of TIME staff. “We made a lot of portraits in a short window of time, but what was interesting for us and important for the story was the mixture of people,” says Linz.

Not surprisingly, Oettinger and Linz say they have found inspiration for their photography through painting. “I have been painting since I was a kid, and that was my first contact with art,” says Oettinger. Some favorite artists—Emil Nolde, Pablo Picasso, Kees van Dongen, and Lucas Cranach—informed both the team’s portraiture and their palette, with its unique signature.

“When we began to make portraits, we were interested in Russian-Icon painters that painted for the Russian Orthodox church,” says Linz. “We are very inspired by painters from the Middle Ages for lighting and color palette. We were interested in the balance between deep blacks, while at the same time as having soft colors. We saw in the paintings that soft colors get their strength in combinations with deep blacks and it took a long time to infuse that thinking into our work.”

But the richness in their pictures rises from more than color. A session always starts with a simple sitting, nothing staged. Oettinger and Linz rotate as photographer and art director from one shoot to the next, which I got to witness on set. After working together for over two decades, they have an incredible rhythm and an exceptional shorthand. They are always looking for truth. “People are so open with their heart and with their eyes. Looking at you through the camera is incredible sometimes. Just keeping it simple, having the right respect and the right distance,” says Oettinger. The final result—a push/pull among power, beauty and dignity—captures the particular tension of this moment, and the connective tissue of the 2017 Person of the Year Issue. 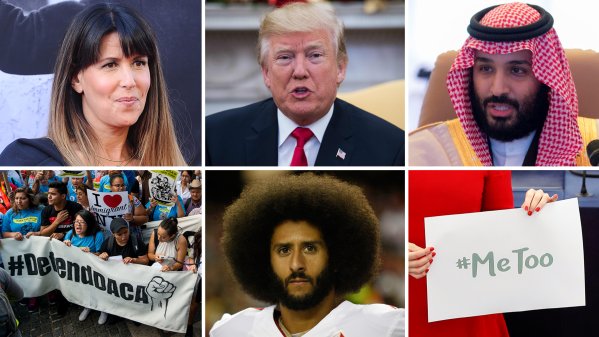 Here's the Winner of the Reader Poll for TIME's 2017 Person of the Year
Next Up: Editor's Pick