11 Books-Turned-Movies You Should Read This Awards Season

The prestige films likely to win awards in 2018 include adaptations of a dozen popular and acclaimed novels, memoirs and biographies, by authors young, old, and dead, with settings including Civil War-era Virginia, 1980s Italy and 2040s L.A. Whether before or after you hit the cinema, here are the books to read if you want to experience the literary side of awards season.

All the Money in the World

Originally, Kevin Spacey starred as J. Paul Getty in this movie about the 1973 kidnapping of the billionaire’s grandson. But after allegations of sexual misconduct emerged around the actor, director Ridley Scott reshot all his scenes with Christopher Plummer in an effort to redeem the movie for awards season. The screenplay is adapted from a 1995 book by John Pearson, originally published with the title Painfully Rich.

Sofia Coppola’s story of women fending for themselves (and terrorizing a man in their midst) at a Virginia girls’ school during the Civil War is a remake of the 1971 film of the same name — which is itself an adaptation of the 1966 Thomas Cullinan novel. Though not a frontrunner for the Oscars, it could see some traction.

Ok, this one’s not directly adapted from a book, but it is based on characters from Philip K. Dick’s Do Androids Dream of Electric Sheep? The movie is considered a contender in several technical categories.

Call Me by Your Name

André Aciman’s 2007 novel — about a teenager’s love affair with his father’s research assistant during a summer on the Italian Riviera — serves as source material for this critically acclaimed movie, considered a frontrunner for Best Picture, Best Director, Best Actor (for Timothée Chalamet) and other top categories.

In 2003, an aspiring actor named Greg Sestero agreed to appear alongside writer/director Tommy Wiseau in his movie The Room. It bombed and closed after its opening weekend, but went on to become a cult classic. Sestero wrote about his experience on set in the 2013 book The Disaster Artist. It has now been adapted for a movie starring James Franco, his brother Dave, Seth Rogen and others.

As a young man, the actor Peter Turner had a relationship with the much-older Gloria Grahame, a femme fatale of the Golden Age of Hollywood. Years later, when she was dying, she turned to him to care for her in her final days, in his family’s home in Liverpool. Turner’s memoir serves as the basis for the film, which could deliver an acting nod to Annette Bening.

First They Killed My Father

Angelina Jolie worked with Cambodian author Loung Ung to adapt her 2000 memoir about surviving atrocities under the Pol Pot regime. The Netflix movie is considered a strong contender for Best Adapted Screenplay.

Steve Carell may get a nod for his role as a Vietnam veteran who reunites with his old buddies to bury his son, a Marine who died in the Iraq War. The story is based on the 2005 novel of the same name by Darryl Ponicsan.

Jessica Chastain is once again a Best Actress contender for her portrayal of Molly Bloom, a former skier who ended up running a high-stakes poker game that catered to the Hollywood elite before the FBI shut her down. The biopic is based on Bloom’s own memoir.

Jake Gyllenhaal has generated some Oscar buzz for his role depicting Boston Marathon bombing survivor Jeff Bauman, who lost both of his legs in the attack (and was the subject of a famous photo taken on the scene). The film is based on Bauman’s 2014 memoir of the same title. 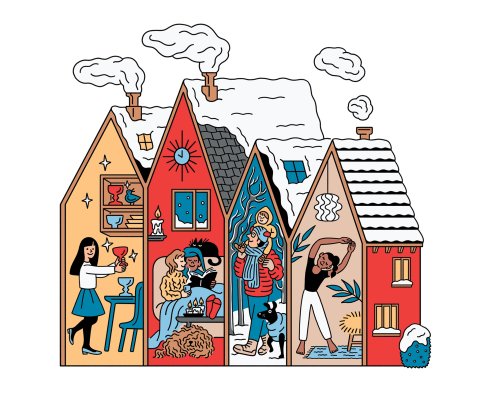 Death Cleaning to Hygge: These Books Want to Be the Next Marie Kondo
Next Up: Editor's Pick