Cover of 'Signal,' a German propaganda magazine printed in Nazi Germany from 1940 to 1945, with the aim to distribute it in neutral countries and in those that the Third Reich had already occupied, or was about to occupy. Italian-German bilingual edition issue, Deutscher Verlag, Germany, Berlin, Nov. 11, 1942.
Fototeca Storica Nazionale/Getty Images
By Nicholas O'Shaughnessy / History News Network

While Facebook founder Mark Zuckerberg has apologized for the ways in which his creation has been used to divide people, the actual extent and impact of Russian propaganda in the U.S. election remains unclear. Facebook has admitted that it had found an operation (likely based in Russia) which spent $100,000 on thousands of U.S. ads promoting divisive social and political messages. The company’s research revealed that 3,000 ads and 470 “inauthentic” accounts and pages were used to spread “polarizing” views on topics including immigration, race and gay rights. While this organized use of social media technology by a foreign power to undermine U.S. democracy and influence the outcome of an election seems unprecedented, the importance of “fake news” and controlling the multi-media information agenda was first understood and used to devastating effect over 80 years ago by the Third Reich.

From Napoleon to Putin, many regimes have used propaganda as an instrument of government. But under Hitler’s regime propaganda was no mere instrument but the very medium of government itself. Every means of communication was explored and exploited. Modeled on LIFE magazine, the glossy photo journal Signal was produced in full color and over 20 languages specifically aimed at audiences in neutral allied and occupied countries. LIFE itself admitted that “The chief U.S. foreign propaganda magazine Victory…. is but a pallid imitation … The deadliest weapon of the vast axis propaganda arsenal is Signal.” With a budget of $2 Million, and a circulation of 2.5 million in 23 countries, its English language edition was available in the U.S. until December 1941. The promoter of the magazine was the chief of the Wehrmacht Propaganda Troops, Colonel Hasso von Wedel. There was a complete division of propaganda soldiers in the German Army, and its PK units. One hundred and twenty men strong, specialists in journalism, film and photography, they scoured the German front, retrieving brilliant imagery to transmit around the world with Hollywood style and panache. The great battery of eight radio transmitters at Zeesen could reach the entire world with bespoke radio channels. There was even a Radio Waziristan for the North-West Frontier.

Clandestine radio stations targeted at the British Isles included Radio Caledonia or the Workers’ Challenge station. The audience figures for Lord Haw-Haw, the traitor William Joyce, were enormous at 70% of radio listeners over the weekend. People were finding the BBC’s coverage of the war overly formal and in contrast were attracted by the often amusing and sardonic alternative version of events which included scalding critiques of English society. A survey at the time notes that 58% of listeners were attracted “because they found his version of the news so fantastic as to be funny,” a phrase which could almost have been designed to describe the average Facebook news item.

Targeting America through propaganda was a huge part of the Nazi agenda. There were many that Germany wished to convince or at least neutralize, including the many German Americans. But even though Goebbels retained renowned PR executive Ivy Lee at $30,000 and a bogus literary agency was set up to publish books and articles purveying the Reich’s agenda, American support for Nazi Germany was negligible. But the Nazis’ sheer domination of the information war, and flair for propaganda made Americans nervous. In March 1943 LIFE magazine admitted: “there was one theater of the war where Americans were still not big enough, sure enough or smart enough to challenge Axis superiority—the theater of political warfare or propaganda …. Was the U.S. winning or losing the war of words? … Nobody in Washington knew better than OWI [Office of War Information] Director Davis that he was running a puny pushcart compared to the high-powered propaganda machine operated by the Nazis. The overseas branch of the OWI spends only $26 million a year. Nazi Dr. Goebbels spends between a quarter of a billion and half a billion dollars annually…. They have talent, experience, almost unlimited funds and no compunctions about honesty.”

By comparison, the diffident British regarded the whole activity with ambivalence bordering on distaste. Sir Harold Nicolson notes in his Diary: “We complain that there are no photographs of the sinking of the Bismarck. Tripp says that the official photographer was in the Suffolk and that the Suffolk was too far away. We say, but why didn’t one of reconnaissance machines fly over the ship and take photographs? He replies: well you see, you must see, well upon my word, well after all, an Englishman would not like to take snapshots of a fine vessel sinking. Is he right? I felt abashed when he said it. I think he is right.”

Lies and fake news were a key tool for the Reich – in fact the Second World War was begun with fake news. It was not with the invasion of Poland but with the manufacture of a border incident, where the bodies of concentration camp inmates were stuffed into German uniforms, riddled with bullets and placed around the radio station at Gleiwicz. “This was a Polish invasion!” Nazi Germany bellowed to the world and Hitler hectored the Reichstag promising to return bomb for bomb. Goebbels was also entrepreneurially responsive in devising the Nazis’ frauds and swindles. When a small town American newspaperman called Kaufmann wrote a minor self-published book advocating the sterilization of Germans, Goebbels snatched the opportunity, turning Kaufmann into an advisor to Roosevelt, Stalin and Churchill, and hence the power behind the throne, the hidden Jewish manipulator.

The Nazis fundamentally understood that public opinion was merely something that could be manufactured: propaganda would make people believe anything the regime wanted them to. As Reichsmarshal Goering told the Nuremberg Tribunal: “it is always a simple matter to drag the people along, whether it is a democracy, or a fascist dictatorship, or a parliament, or a communist dictatorship. Voice or no voice, the people can always be brought to the bidding of the leaders. That is easy. All you have to do is to tell them they are being attacked, and denounce the pacifists for lack of patriotism and exposing the country to danger. It works the same in every country.”

Disinformation as conscious organized lying was an established and well integrated part of Nazism’s methodology of control and incitement: claiming that Saar leader Max Braun had fled; that Kolberg had not fallen to the Russians, that the Jews were not being massacred. Today, Russian-sponsored disinformation is designed to sabotage the notion of objective truth. When in 2016 Guccifer 2.0 and DC leaks appeared they were designed to appear as being from American hactivists who “respect and appreciate freedom of speech” while they lubricated social media attacks on Hilary Clinton. Recently, Prime Minister May denounced Russia explicitly for “deploying its state-run media organizations to plant fake stories and photo-shopped images in an attempt to sow discord in the West and undermine our institutions.” Just as the Gerasimov doctrine (named after its deviser Russian General Valery P Gerasimov) posits that covert tactics such as working through proxies will rise in importance, cyber-interference in the U.S. election constitutes a newly weaponized yet old and insidious form of propaganda. Mr. Trump should dismiss it at his peril.

Nicholas O’Shaughnessy is Professor of Communication at Queen Mary University of London, U.K. His new book, Marketing the Third Reich: Persuasion, Packaging and Propaganda, is now out published by Routledge, 2017 and available from Amazon. His previous book Selling Hitler: Propaganda and the Nazi Brand was published in 2016. He is also Visiting Professor in the Centre for Strategic Communication at King’s College London U.K. (Department of War Studies); and Quondam Fellow of Hughes Hall Cambridge University, U.K. 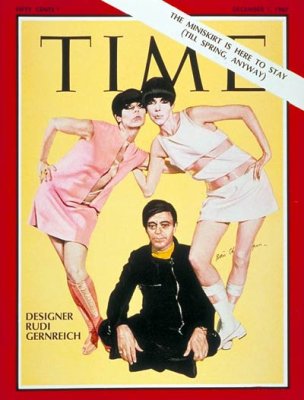 50 Years Ago This Week: Miniskirts on the Rise
Next Up: Editor's Pick