Jimmy Kimmel to Roy Moore: 'There Is No One I Would Love to Fight More Than You'

A Twitter feud between Republican Senate candidate Roy Moore and late night show host Jimmy Kimmel continued to escalate on Thursday, with the comedian telling Moore “there is no one I would love to fight more than you” on Jimmy Kimmel Live!

The squabble kicked off when comedian Tony Barbieri—for a segment on Kimmel’s show—infiltrated a Nov. 29 Moore campaign event at a church in Theodore, Alabama. Barbieri, playing a character called “Jake Byrd” and wearing a “Gimme Moore” T-shirt, shouted down a protestor before being escorted out by security, AL.com reported. “The judge is a man’s man,” Ribieri said mockingly. “Does that look like the face of a molester?”

Moore, a former federal judge who is running for the Alabama Senate seat vacated by Attorney General Jeff Sessions, has been accused by multiple women of sexually predatory behavior when they were teenagers.

Moore tweeted a link to a Breitbart story about the stunt on Thursday, challenging the late show host to come to Alabama and settle their differences “man to man” in Alabama and instigating an exchange of tweets that culminated with Kimmel saying he would “leave his daughters at home” if he met Moore.

Kimmel addressed the quarrel on Jimmy Kimmel Live! Thursday night, where he again questioned Moore’s Christian convictions, in light of the allegations against him. Moore’s campaign has denied and sought to discredit the allegations against him, which were originally reported by the Washington Post, by focusing on his evangelical background and portraying himself as the victim of a campaign by mainstream media to silence Christian conservatism.

“I happen to be a Christian too,” Kimmel said. “And I will share what I learned at my church: at my church, forcing yourself on underage girls is a no-no. Some even consider it might be a sin.”

Kimmel reiterated his willingness to meet Moore in Alabama and talk over their political differences— or to settle the dispute with their fists, “which is kind of what it sounds like,” Kimmel said. “I accept by the way,” the late night host said to cheers. “I will put my Christianity aside, just for you, for a fight.”

Ribieri has made previous appearances as his long-lived “Jake Byrd,” character at President Donald Trump’s inauguration at a Bernie Sanders campaign rally in San Diego in March 2016. At the event on Nov. 29, he also interrupted interviews attendees in the parking lot to praise Moore as a “genius,” and confused local media, who took him for a genuine supporter. 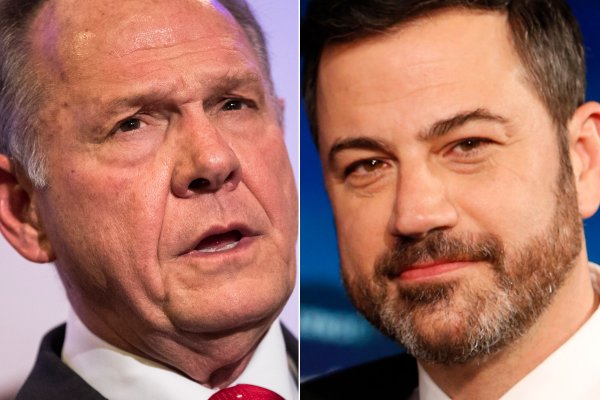