‘North Korea Is the Biggest Threat to All Humankind.’ U.S. Ambassador to China Terry Branstad Talks to TIME

Terry Branstad, then governor of Iowa, speaks to members of the media in the lobby at Trump Tower in New York, U.S., on Tuesday, Dec. 6, 2016.
Albin Lohr-Jones/Pool via Bloomberg via Getty Images
By Charlie Campbell / Beijing

Tucked between northeastern Beijing’s third and fourth ring-roads, the U.S. Embassy in China is a squat complex of silver-gray buildings, with the ambassador’s office on the fourth floor. Inside, besides the requisite star-spangled banners, grinning photos and auspicious Chinese calligraphy, the new occupant has placed what looks like an incongruous addition on a low shelf behind the desk: a model of a yellow-green John Deere tractor.

“They have five factories here,” U.S. Ambassador to China Terry Branstad tells TIME in an exclusive interview, his first since arriving in Beijing in July. “But I had to sell all my John Deere stock when I was appointed ambassador because they do business in China.”

And yet a tractor is, in many ways, a fitting symbol of Branstad’s heritage as the former Governor of Iowa — America’s second most productive agricultural state after California — as well as the deep economic and cultural links he’s built with China since his first visit here in 1984. Some $1.4 billion of Iowa’s total $2.3 billion agricultural exports in 2015 went to China — mainly soybean and pork — and U.S. President Donald Trump has tasked Branstad with helping to boost the trade relationship on a national scale, hopefully eating into the $347 billion trade deficit that Trump claims costs American jobs. (Though most economists disagree.)

But besides trade, Branstad’s new portfolio includes easing the myriad frictions between the world’s established superpower and its presumptive one. Washington and Beijing clash on human-rights, censorship, territorial claims in the South China Sea, intellectual property theft, cyber-espionage and much more. Top of the agenda is how to rein in North Korea’s nuclear ambitions. On the morning Branstad sat down with TIME on a white leather sofa, briefing folder open on his lap, Kim Jong Un fired another ballistic missile into the Sea of Japan — one experts say soared ten times higher than the International Space Station and could potentially have reached anywhere in the continental United States.

“North Korea is the biggest threat to all of humankind as far as I’m concerned today,” says Branstad. “And I think the cooperation and collaboration with China has improved dramatically since I’ve been here.”

It doesn’t hurt, of course, that on Apr. 29, 1985, Branstad met a young Chinese official from Hebei province leading a five-strong agricultural delegation to Iowa. “His business card said ‘Feed Association of Shijiazhuang,’” Branstad recalls. That official’s name was Xi Jinping, and today he boasts several more impressive titles, including President of China. The two men stuck up an easy rapport that continued as Xi ascended the slippery ziggurat of the Chinese Communist Party (CCP). When Branstad received Trump’s nomination for ambassador, Chinese officials described the mustachioed 71-year-old as an “old friend of China,” a big compliment in Beijing-speak.

“I’m in a unique situation in that I’m an old friend of Xi Jinping and a loyal supporter of the [U.S.] president,” Branstad explains. “And this is probably the most important relationship in the world — between China and the United States.”

Xi and Branstad connected again in 2011, when, in his second stint as Iowa governor after an 11-year hiatus from public life, Branstad made another trade mission to Hebei province. “Normally I visit the party secretary or the governor of Hebei,” says Branstad. This time, however, “I get to meet with the Vice-President Xi Jinping in the Great Hall of the People.”

Xi spent 45 minutes reminiscing about his time in Iowa in 1985 (“as governor I only gave people half-an-hour,” grins Branstad) — reeling off the names of all the people he’d met and places visited. “He went to a birthday party, he visited farms and factories, he went to the president of the corn growers, he went to a turkey farm, he went to the Monsanto plant,” says Branstad. “He said that when he thinks of America he thinks of the wonderful people he met in Iowa and he calls us ‘old friends.’”

Following that visit, Branstad decided to invite Xi for a reunion in the Hawkeye State the next year. Within months plans were well underway, allowing Xi to reconnect with the Dvorchak family, with whom he stayed in Muscatine in 1985 — even posing for informal photos around a roaring fireplace. It’s a cozy scene that is difficult to reconcile with a man who at October’s 19th CCP Congress was apotheosized alongside Mao Zedong as one of modern China’s greatest leaders.

“Long-term friendships and relationships are really important in this culture,” says Branstad. “But now I have to deliver the message on things that we are not happy with. And yet I think I have some credibility because of that long-term relationship.”

Trump painted China as America’s nemesis during his volcanic campaign, blaming its export-driven economy for stealing American jobs, as well as predatory trade practices such as currency manipulation. As Branstad went through the ambassadorial confirmation process, Trump even questioned Chinese sovereignty over self-governing Taiwan — a bold affront to Beijing, which regards the island of 23 million as its own.

Since then, though, Trump has dialed down his antagonism, welcomed Xi to his Florida resort of Mar-a-Lago in April, and then enjoyed a gilded “state visit-plus” to Beijing earlier this month. Trump was treated to unprecedented honors, such as dining in the Forbidden City — home of China’s emperors. But the subsequent joint press conference featured no questions (in contrast to Barack Obama’s team insisting on some during his last visit, in a pointed reminder to their authoritarian hosts on the merits of a free press). In fact, TIME and several other foreign media were denied access altogether. Critics said China was being given a free pass for its worsening record on human-rights and free speech. Jorge Guajardo, Mexico’s ambassador to China from 2007 to 2013, told Quartz that China played Trump “like a fiddle.”

For Branstad, however, there is no letting up on subjects that are “part of American DNA.” He says: “We are bringing up human-rights issues all the time. Unfortunately, China is an authoritarian system, it’s a one-party communist-ruled country. We are a democratic country with a free-market system.”

Branstad says he had “many meetings” with Chinese officials regarding imprisoned democracy advocate Liu Xiaobo, and managed to allow him to be visited by American and German doctors. Liu died in detention, unable to seek treatment for cancer abroad that medical experts said could have saved his life. Today, Liu’s wife, Liu Xia, remains under virtual house arrest. She has never been charged with a crime yet is unable to leave the country despite repeatedly expressing her desire to do so.

“We’re still trying to see that his wife is free to travel,” says Branstad. “But we find that the best and most effective way to try and get action here is not to shame them publicly but to meet with them privately.”

That’s also how Branstad hopes to make progress on North Korea and he has enlisted the help of Sheena Greitens, an East Asia expert at the University of Missouri. She put together a group to coach the new Ambassador about the Koreas, the South China Sea, Taiwan, and other regional issues. China has also signed up to two new U.N. Security Council Resolutions since Branstad took the job, and he believes Chinese support for its historic ally is wavering. “I think the attitude has changed here,” he says. For one thing, he adds, the timing of North Korean nuclear and missile tests at politically sensitive moments for Beijing show they “are as much against Xi Jinping and China as they are against the United States.”

Whether China will turn off the half a million barrels of oil it sends to North Korea each year is another question. For Xi, squeezing the Kim regime to the brink of collapse would risk open conflict with an irascible nuclear power, as well as a torrent of refugees pouring across their shared border, and the strategic headache of a united Korean peninsular ruled from Seoul, possibly putting American troops on his doorstep. Still, “China has taken steps much further than a lot of people thought they ever would on the sanctions,” says Branstad. “Obviously the big thing is oil — that’s probably the biggest thing that could make a difference.” And if the situation doesn’t improve? “Military action is a last resort, but that is an option as well,” he says.

That would, of course, mean missiles falling less than 500 miles from Beijing, where Branstad has not only been joined by his wife, but also their daughter and her husband — who both work at an international school — as well his two young grandchildren. The family is heading back to Iowa for Christmas, but held Thanksgiving in the sprawling Chinese capital, where Branstad says all are thriving despite an oppressive regimen of choking pollution, whirring air purifiers and freezing temperatures. His daughter’s family has even purchased an electric buggy to weave through the city’s traffic like savvy locals. “They are young,” says Brandstad of his grandchildren, “but this is a great time to learn Mandarin, just like the president’s granddaughter. We’re hopeful that they’ll be fluent before it’s over.” 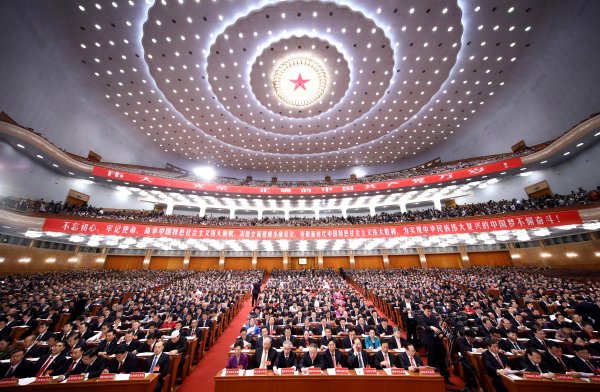