Let's Leave Garrison Keillor in the Past Where He Belongs

Here are things that Garrison Keillor and I have in common. We are both tall. We have both performed at the Historic Fitzgerald Theatre. We have both worked for Minnesota Public Radio. (Specifically, I am a contractor for their parent company, American Public Media.) When Keillor said he was fired this week, following allegations of misconduct, my first thought was, “Wait, he still works here? I thought he retired.” My second thought was, “Bye!”

I try not to read Internet comments, particularly any that originate in Minnesota, where I grew up and live today. This is the home of Prince. Of “Minnesota Nice.” The home of Garrison Keillor’s fictional Lake Wobegon, where the women are strong, the men are good looking, and the children are above average. His long-running show, A Prairie Home Companion, perpetuated a beloved but fictional version of Minnesota. One that is all hot dishes and church basements, oh geeze and ya, you betcha. To read the comments on some of our local media yesterday, you’d think that Minnesota Public Radio had dropped a bomb on a real city, not simply severed ties with the creator of a fictional one.

Here is what I know about the Garrison Keillor accusations: nothing. Or, nothing more than you know. We read the same condescending and atrocious comment he gave. We read the same sterile PR statement from MPR.

Here is what I know about Garrison Keillor’s work: it’s brought a lot of money and notoriety to the MPR organization. It wouldn’t be unfair of me to say that A Prairie Home Companion and all the money it’s made have made it possible for me to launch my own show (a podcast called Terrible, Thanks for Asking). Letting Keillor go likely has huge financial implications for the company, which spent a month investigating the allegations.

I’m not impressed that MPR terminated Garrison Keillor’s contracts. Believing women is a pretty baseline expectation for me, and giving anyone a round of applause for being decent sets the bar lower than it already is.

And reading the comments on any of these stories, you realize that bar is already dangerously low. People are decrying MPR for firing Garrison Keillor because they assume that where there’s smoke, there’s a vast feminist conspiracy trying to prevent men from ever touching women again, and heaping huge financial rewards on women who come forward.

And one of them, from a person named Ray, went like this:

“Not to go all slippery slope, but there’s a part of me wondering if this isn’t going to contribute to some odd gaps in our media history. Once we wipe out every single book, film, television, podcast, radio show, etc…that has been tainted by the presence of an offender, what will we have left?”

A lot of people seem to share that concern, this odd notion that the choice we have is whatever offender is in a position of power…or nothing at all. I know why people love Lake Wobegon. It offers a comfortable and uncomplicated version of our world, and our state. The gaping hole Ray is talking about already exists: there are plenty of voices in Minnesota and beyond waiting for their airtime.

I was one of them.

The day before his firing, Keillor published an op-ed in the Washington Post titled “Al Franken Should Resign? That’s Absurd.” I’ll tell you what’s absurd: Garrison Keillor. The editorial is an article about not judging past actions by current moral standards. In other words, it’s about himself. But he can’t just say that, so he starts with a few examples. One, is the displeasure he finds in a popular Minneapolis lake being renamed from Calhoun — a name that honors a slavery enthusiast and an author of the Indian Removal Act, which stole land west of the Mississippi from Native Americans — to the Dakota name Bde Maka Ska. His argument is that renaming it won’t change history, that “the effect of this on the slave trade in Minneapolis will be slight.”

Well, duh, dude. We know how time machines work, and we know how words work. Changing a name on a lake doesn’t change the past. It changes our present. It’s a course correction that says, “Hey, hmmm, this is pretty messed up to use the name of a terrible person on a beautiful lake we stole from the Dakota people!”

No woman who speaks up gets to change her past. And in many cases, speaking up doesn’t exactly change her world for the better. Again, I refer you to Internet comments.

Calling out an offender for who he is and changing the name of a lake are not pointless just because they inconvenience the status quo. Neither of these actions change the past, but they have the potential to change the world we live in now.

The name Bde Maka Ska doesn’t change history. But it helps to reflect what this city, this state, this country really are. Not Lake Wobegon. But a place where the economic disparities between blacks and whites are some of the worst in the country. A place where a Somali woman had her face smashed with a glass of beer at an Applebee’s because her assailant wanted her to speak English. A place with plenty of real stories and real people, ready to take the mic (and some funding, if you have it).

That’s the news from our Minnesota. Where our children will learn better, our women are heard, and men like you can stop talking.

McInerny is the author of It’s Okay to Laugh (Crying is Cool, Too) and the host of the American Public Media Podcast Terrible, Thanks for Asking. She lives in Minnesota with her family, where she runs non-profit organization Still Kickin. 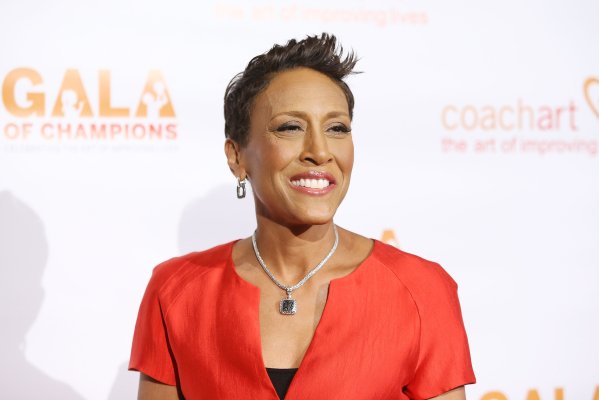 Robin Roberts: Grief May Change Some Holiday Traditions. But You Can Create New Ones
Next Up: Editor's Pick