The Democratic lawmaker leading the charge against sexual harassment on Capitol Hill said it’s time for Congress to enforce a “zero tolerance” approach.

In an interview with TIME Wednesday evening, California Rep. Jackie Speier said that official policies on sexual harassment by members of Congress and their staff need to be more rigorously followed.

“We say we have zero tolerance for that, but what does zero tolerance mean,” she says. “They’re meaningless words if you’re not willing to say ‘We’re not going to allow this to go on here.'”

Her statements come amid a flurry of allegations against two Democratic members: Rep. John Conyers of Michigan, who has been accused of harassing staffers, and Sen. Al Franken of Minnesota, who has faced claims from multiple women that he touched them inappropriately.

The interview came after the House voted to mandate anti-harassment training, but before House Minority Leader Nancy Pelosi explicitly called for Conyers to resign. The long-serving Democrat has acknowledged paying a settlement to one of his accusers but denied harassing anyone, and his lawyer said Thursday that he would not be pressured to leave Congress.

When asked if Conyers should step down in the interview with TIME, Speier said: “I believe the women. And I’ve got to believe that the Congressman recognizes that this is bigger than him. The institution needs to be held to a high level of purity on this issue and we haven’t. We have been willing to look the other way for years, for decades. It’s a different time.”

She said that she recognizes the conversations will be uncomfortable for a lot of her colleagues. (“There’s nothing enjoyable about saying to one of your colleagues who you have respected as a legislator, ‘You can’t stay here,'” she said.) But she added that discussions on what is and is not tolerated within the halls of the Capitol are not political and should be applied to lawmakers from both parties.

She also harshly criticized Franken, who said in a recent interview that he had not realized his behavior crossed a line and that he was not sure if other women would come forward.

“You don’t grab someone’s buttocks. You just don’t do that,” Speier said. “The fact that he said recently that there may be others but I don’t know? I mean, how do you not know if you make a habit of grabbing someone’s buttocks? What gives you that right?”

As country deals with a seemingly endless flood of allegations of sexual harassment at the hands of powerful men, Speier is among a group of lawmakers who have been holding up a mirror to Congress and calling on colleagues to address the issue head-on.

Earlier this fall, Speier shared her own story of assault. When she was a Capitol Hill staffer, she said in a video, a senior aide in her office “held my face, kissed me, and stuck his tongue in my mouth.” Since, she’s been inundated with calls and from staffers who have come forward with their own #MeTooCongress stories. She later testified about staffers experiences with both harassment and the current dispute resolution process before a House panel. Speier and a bipartisan group of lawmakers have also introduced legislation to address the issue.

Speier said she was pleased that the House passed a resolution to mandate anti-harassment and anti-discrimination training for all members and staff on Wednesday evening, which she says she’s been calling for since 2014. But, she added that the anti-harassment training is just a good first step: the process through which victims of harassment file complaints in Congress also needs a major overhaul.

“The system that exists now is really a system that protects a harasser,” she says. “It makes Congress an enabler, actually, for bad behavior.”

When a victim of harassment first alerts the Congressional office that handles workplace issues, the Office of Compliance, it takes months before that person can file a formal complaint against their abuser. Under the current process, victims must undergo 30 days of mandatory counseling, followed by another 30 days of mandatory mediation. If the issue is not resolved in mediation and the person wishes to file a formal complaint with the OOC or in federal court, they have to wait until the end of a 30-day “cooling off” period until they can do so.

Throughout that time, they’re restricted from speaking openly about the case due to the strict non-disclosure agreements they must sign during the process. A bipartisan bill that Speier introduced in the House last week would change that.

“Right now a victim goes through 90 days of hell and, as one victim said to me, the process was almost worse than the harassment,” says Speier. “I want to transform the process to one that’s much more victim centered.”

The Congresswoman says that given the attention the issue of sexual harassment has gotten, there is a real bipartisan opportunity to take concrete steps to educate members about harassment and make sure victims can be protected should they decide to come forward. She applauded House leadership and her Republican colleagues for also taking the issue seriously, but said that if it weren’t for the scandal around Hollywood producer Harvey Weinstein, she doubts anything would have happened. Going forward, she said, if the reporting process is not changed it could be a “big black eye for the House.”

But adds, “I don’t think that’s going to happen because there has been recognition that we have to do something.” 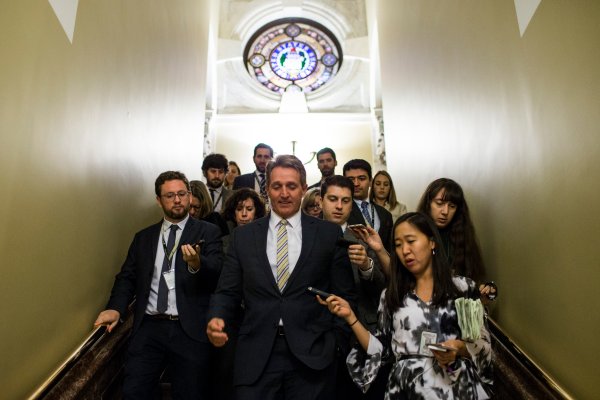 The Republican Tax Plan Faces a Critical Few Hours
Next Up: Editor's Pick