And that’s the dividend switch.

For much of the past decade, investors have operated against the backdrop of two big trends: historically low interest rates, which have frustrated retirees living off the income their portfolios produce; and rising equity prices, which have encouraged risk-taking in the market.

As a result, many investors have been trading in some of their low-yielding bonds for dividend-paying stocks during the bull market, with the hope of earning greater income and enjoying price gains.

This would explain why dividend-paying stocks, which have historically traded at a discount to the broad market, are now frothier than shares of companies in the Standard & Poor’s 500 index of U.S. stocks.

But while the strategy may have worked to investors’ advantage in the early stages of the rally, which began in 2009, strategists say the risks associated with this move are rising as the bull market ages.

“Stocks are growth-oriented investments that come with a lot of risks, and bonds are risk-reducing vehicles,” says Lewis Altfest, CEO and chief investment officer for Altfest Personal Wealth Management. “You shouldn’t juxtapose the two–particularly at this time in the cycle.”

In the final stages of an economic expansion, interest rates often begin to rise as the recovery heats up. Since early September, yields on 10-year Treasury notes have jumped from 2.04% to 2.38%. Meanwhile, the Federal Reserve is expected to raise short-term rates another quarter of a percentage point at a regularly scheduled meeting on Dec. 13.

“Another risk,” says Jack Ablin, chief investment officer at BMO Private Bank, “is that the dividend itself can be cut, which you saw recently at General Electric,” the industrial giant that slashed payouts to shareholders by 50% to shore up its finances. “Unlike a bond, there’s no obligation for companies to keep paying dividends,” he says.

Of greatest concern, though, is how a retiree’s portfolio might be affected if the bull market were to end. While it’s impossible to tell how long stocks will keep going up, this bull market is nearing its ninth birthday, which makes it more than twice as old as the typical rally. Financial advisers fear that when the market eventually sells off, investors who have swapped their bonds for stocks will come to realize the real risks involved in this strategy.

The potential of suffering big stock-market losses is particularly threatening to older investors who are at or near retirement, because they will have little or no time to make up those losses before they must tap their accounts.

“If you face a downturn at a certain point just before or at retirement, and you’re too exposed to stocks, it can ruin your entire future,” Altfest says.

So what should investors do?

The first step is to revisit their underlying investment strategies to make sure they’re adhering to a mix of stocks and bonds that’s appropriate, even if that means settling for a little less income, financial planners say.

But what if retirees simply need more cash than their bond yields provide? The best source of cash flow might be hiding in plain sight. Investors can simply trim some of their excess equity holdings and use the proceeds to fund their income needs.

Ultimately, that may be the safer strategy. 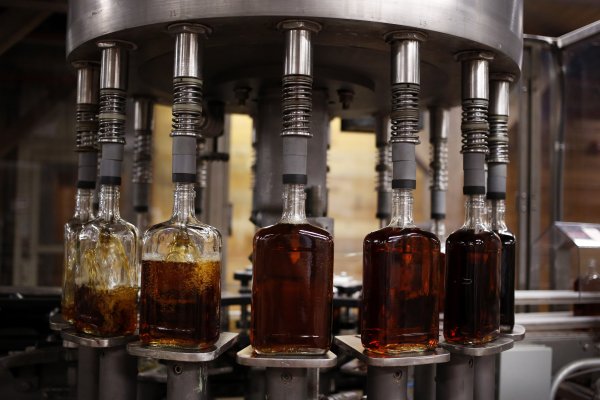 Drinkers in Europe Are Getting a Thirst for American Liquors. But Will Trade Keep Flowing?
Next Up: Editor's Pick