President Trump Lashes Out at the Wrong Theresa May on Twitter

President Donald Trump tweeted the wrong account Wednesday night when he shot back at British Prime Minister Theresa May, after she said he was wrong to share anti-Muslim videos tweeted by a U.K. far-right group.

Trump had retweeted three videos posted by the British ultranationalist group Britain First. The President’s dissemination of the unverified videos, which allegedly show Muslims committing acts of violence and disrespecting Christian symbols, drew outrage on social media. Responding through a spokesperson, May said Trump should not have shared the posts from Britain First, a group that promotes “hateful narratives which peddle lies and stoke tensions.”

Trump lashed back, advising May to “focus on the destructive Radical Islamic Terrorism that is taking place within the United Kingdom. We are doing just fine!”

Unfortunately for Trump, he directed his post not at the British prime minister or at the official Twitter account of the prime minister’s office, @Number10Gov, but at a private account that has six followers and has tweeted just nine times since February, 2009.

Despite drawing sharp criticism from government and opposition politicians in the U.K., Downing St. rejected calls to revoke Trump’s invitation for a state visit to Britain, according to the Associated Press. A date is yet to be set. 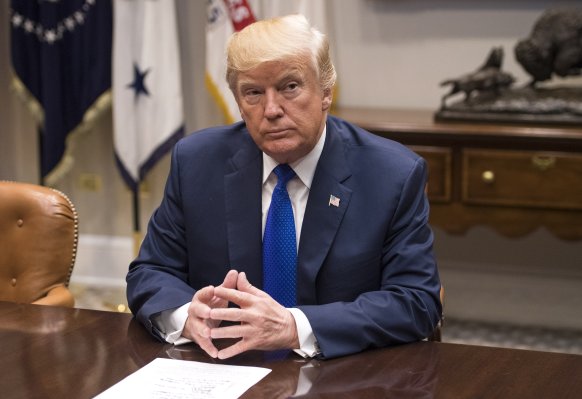 Ex-Twitter Worker Says He Shut Down Trump's Account
Next Up: Editor's Pick