Graduate students at more than 40 universities across the U.S. staged rallies and walk-outs against the Republican tax plan on Wednesday, urging lawmakers not to include in the final bill a provision that would turn their tuition waivers into taxable income.

Graduate students have warned that such a provision — which was written into the bill that passed the House this month — would significantly impact their finances and possibly hinder their ability to complete their degrees and pursue careers in academia.

“[The students] do so much of the work at public and private research universities,” said Noah Charles, a Ph.D. candidate in physics at Ohio State University, who helped organize Wednesday’s national protest. “By not, for a few minutes, doing the work that we normally do, we can show what an essential part of the system we are.”

The Senate tax bill, which is expected to be put to a full vote this week, does not include the provision on graduate tuition waivers. If it passes, Republicans will need to reconcile the two versions of the tax plan. Some GOP lawmakers, referencing concerns from their constituents, have said they want to reach a “positive solution” on tuition waivers.

Experts at the Urban-Brookings Tax Policy Center said in a recent post that “graduate students and workers attending school part-time could see the largest tax increases” under the House plan. The American Council for Education has also projected that the House bill’s various provisions related to higher education would increase the cost to students by more than $65 billion by 2027.

At Ohio State on Wednesday, graduate students held a teach-in at the student union where they explained how the bill would affect teaching and research assistants. Many of the students brought research and grading to do in public to demonstrate their daily role at the university, Charles said.

Students participate in a walk-out at the University of Southern California on Nov. 29, 2017.
Mona Khaled

Elsewhere, students walked out of academic buildings and rallied on quads. “Hell hath no fury like hungry grad students,” read the sign of one protester in New York City. “Let us just study,” read another.

At the University of Minnesota, hundreds of graduate students marched on campus, warning that the plan would “create a crisis in graduate education,” local TV station Fox 9 reported. Students at Auburn University in Alabama gathered under the chant, “No grad tax,” the Auburn Plainsman reported.

At the University of Kansas, the chants were similar, according to the University Daily Kansan. “Tax the rich — not the students,” protesters chanted. “This taxation means no graduation.” 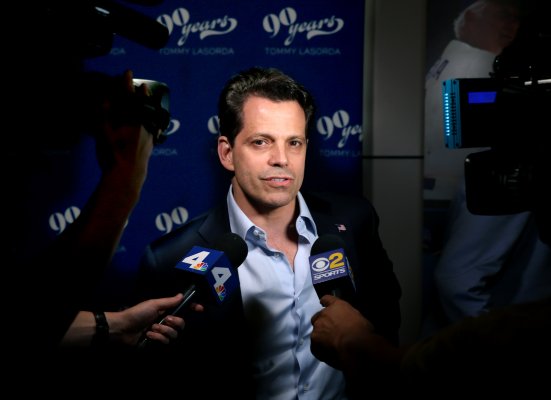 Why Anthony Scaramucci Keeps Attacking a Tufts Student
Next Up: Editor's Pick