Gabby Giffords and Mark Kelly: The New Year Is a Time for Hope, Even After Tragedy

Giffords is a former representative in the U.S. Congress and is co-founder with Kelly, a retired United States Navy combat veteran and NASA astronaut, of the gun violence prevention organization Giffords.

We were married in November of 2007, right at the start of the holiday season. That first New Year’s, we started a new tradition: attending Ambassador Philip Lader and Linda Lader’s Renaissance Weekend conference in Charleston, S.C. It’s the conference President Clinton and Secretary Clinton used to attend when they were in the White House, a gathering where people can reinvigorate themselves by making new connections and sharing new ideas. We participated pretty much every year, including the January 2011 conference. A week after we returned to work to launch the new year, Gabby was shot. The year of 2011, which we had started so inspired, was the hardest of our lives.

Gabby has always loved New Year’s. To her, the way we start fresh has significant meaning. Before she was shot, Gabby was one of those uber-dedicated New Year’s resolution-makers — she always had a list of 10 things she wanted to achieve, whether reading more books or finally taking lessons in the French horn, the instrument she played in college. She always prompted Mark to make his own resolution, because he never would without her encouragement. But that year — and every year since — she’s had one resolution: to keep fighting through her recovery.

When the end of 2011 rolled around and the anniversary of the shooting approached, we decided to go back to the conference. It was an opportunity to come full circle, to get a little bit of closure, to finish where we started. But everything had changed.

Gabby was at the start of a long road to recovery. Her severe aphasia, a result of her traumatic brain injury, made speaking difficult. She’s paralyzed in her right arm and right leg, so she had difficulty moving around. These struggles remain to this day. At the time of the conference, Gabby was still a member of Congress, but she’d resign a few weeks later. Because of the horrific incident that changed our lives, suddenly Gabby was nationally known, and everyone wanted to talk to her. Thankfully, she has always drawn strength from interacting with people — it’s the politician in her.

That was our last visit to Renaissance Weekend, though we’d like to go back someday. Lately, we’ve been more in the mood to spend New Year’s doing something fun with close friends. Last year, we went fishing in Key West.

This year, we’re going to Las Vegas. Another couple, friends from Australia that we’ve known for years, will join us. They’ve suffered significant challenges and tragedy themselves — and we’ve found it can help to be around people who’ve gone through similar challenges. The wife lost her first husband, a classmate of Mark’s from test pilot school, in an airplane accident in the late 1990s. The husband, a Royal Air Force pilot, has been fighting cancer, a sarcoma in his leg. Surgery, radiation and chemo all failed. But his wife is a doctor, and not one to give up, and when he was given six weeks to live she found an experimental drug for him to try. Now he’s in full remission. It’s a year out, and we’re all gathering — along with their kids and ours — to bring in the New Year together, to celebrate him getting through something horrific and to celebrate Gabby, too.

It’s coming on seven years now. And in that time, we’ve learned a lot. You may find that after times of tragedy or struggle, your cherished traditions change. Some may disappear. Others may just need to wait, for now. But if you leave yourself open to them, new ones will appear — and you’ll find causes for celebration and types of resolve that you may not have otherwise imagined. 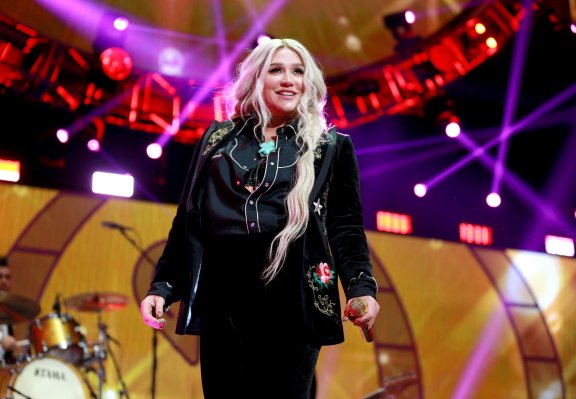 Kesha: The Holidays Are Hard If You Struggle With Mental Illness. Don't Blame Yourself
Next Up: Editor's Pick