Katie Couric: What I’ve Learned Over the 19 Christmases Since My Husband Died

Katie Couric during an interview on "Late Night with Seth Meyers" on Jan. 25, 2017.
Lloyd Bishop—NBCU Photo Bank/Getty Images
Ideas
By Katie Couric
Couric is an award-winning journalist, co-founder of Stand Up To Cancer and in 2016 founded her own media company, Katie Couric Media. Sign up for her daily newsletter here.

The worst Thanksgiving of my life was the Thanksgiving of 1997. My husband Jay had been diagnosed with stage 4 colon cancer eight months earlier — on April 3rd, to be precise. That was the day that would forever divide our lives into two distinct periods: BC and AC. Before Cancer. After Cancer. We had steeled ourselves for the fight. “We will figure this out!” became my daily mantra. By Thanksgiving, it had become increasingly clear that despite my best intentions, saying it would not make it so.

Jay was one of seven, the eldest boy and in many ways, the go-to man of the Monahan family. We piled into our Chrysler minivan (affectionately nicknamed the “Monavan”) and headed to celebrate Thanksgiving with the extended clan at Jay’s sister’s khaki-colored arts-and-crafts house in Darien, Connecticut. Clare — petite, gracious with clear blue eyes and an easy, raspy laugh — had been my go-to Monahan during the frantic, shattering months following Jay’s diagnosis. She had helped me balance dealing with a devastating prognosis and desperately searching for a treatment that would extend his life while giving our daughters, then one and six, some sense of normalcy.

She did all this while talking me off the cliff when I started to resemble the figure in Edvard Munch’s “The Scream.”

Nearly twenty years later, when I think of that Thanksgiving, it makes me cry. My healthy, handsome, athletic husband — the college football and lacrosse player — had become thin and gaunt, but was still impeccably dressed, with a tweed sports coat beneath a quilted Barbour jacket and brown leather lace-up shoes. An English driving cap sat on his head, which was smooth and hairless from chemo. I thought about one of our first dates, a decade earlier, when I had gazed down on his thinning crown from the window of my 9th-floor apartment. Once in the car, I asked him, somewhat insensitively, if he thought he’d be bald when he was older. His retort still makes me laugh. “I’m not sure. Do you think you’re going to be fat and ugly?” Ouch. I never asked about male-pattern baldness again. Now the ravages of cancer meant we would never find out the answer to my question.

As I stared out the window of Clare’s house, I saw that my vibrant, up-for-anything husband had been sidelined. Relegated to watching the impromptu mid-afternoon touch-football game featuring his brothers and cousins seemed beyond cruel. But Jay, as always, was coaching his younger brothers and cheering his extended family on — benched, but refusing to admit defeat.

Celebrating the holidays takes on a new poignancy when someone is dying. As hard as you try, it’s impossible to push away the persistent voices in your head murmuring, “This will probably be your last [insert holiday here] together as a family.”

I wish I had the perfect recipe for taking away that drumbeat of fear and pain. There just isn’t one. My two girls provided comfort and joy. Our families and friends provided unconditional love and support. And the holidays themselves commanded us to appreciate the here and now. In the parlance of modern-day party invitations, Jay’s presence was our present. Though Christmas would come and go, and one month later, his body — bruised and battered by a nine-month uphill battle — would collapse on the powder room floor.

I’ve had 19 Thanksgivings and Christmases since my husband died. Many of them have been full of joy and laughter; the days, months and years of living have made me forget when sleep provided the only refuge and the first few seconds of wakefulness were quickly invaded by a familiar sense of dread.

I now have a new husband, a wonderful person I adore, who is warm and wise and so funny. He’s different from Jay, but I think Jay would approve. I think they would have been friends. His greatest gift has been allowing me to love them both.

Jay often said that I was born on a sunny day, which I took as a real compliment. But that sunniness can also blind you to the suffering of others. No more. Ever since Jay got sick, I have been keenly aware that there are those for whom Christmas cheer is elusive and whose days are far from merry and bright. They might be next to you, picking out an ornament or tying a tree on the roof of their car. They could be ordering a standing rib roast from the butcher or watching their child perform in a fourth-grade assembly or growing impatient when they can’t reach their carry-on in the overhead compartment. They are all around, bravely holding on to the present and terrified about the future.

If you know them, intrude on their privacy by reaching out, even if they turn you away. If you don’t know anyone who fits into this category, say a silent prayer for them, wish them strength and what Emily Dickinson described as “the thing with feathers”: hope. And if you’re lucky enough to have your health and the health of those you love, look around, soak it in and take a moment to give thanks. 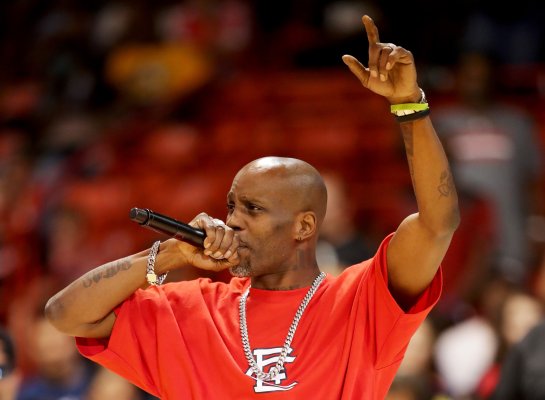 Now DMX Is Rapping Christmas Carols Because Why Not
Next Up: Editor's Pick