Ivanka Trump Has Arrived in India for a Business Summit. Here's What You Should Know

This year’s theme, “Women First, Prosperity for All,” looks to put a spotlight on nurturing more gender-diverse business ownership, as well as innovative ventures that more broadly benefit society. A businesswoman and recurrent representative of President Donald Trump’s administration, the commander-in-chief’s daughter will not only play a prominent role at the conference as a speaker but also seeks to cement her status as a role model for female business owners and entrepreneurs around the world. Here’s what to know:

Why Is Ivanka Trump in India?

Trump is leading the American delegation to the eighth Global Entrepreneurship Summit (GES) in Hyderabad, where from Nov. 28 to 30 more than 1,500 business-owners, investors, educators, and government officials will network and participate in panels and workshops. Previous conferences have been held in Washington D.C., Silicon Valley, Istanbul, Dubai, Marrakesh, Nairobi and Kuala Lumpur.

After delivering a keynote address at the inauguration of the three-day conference, Trump will also participate in two panel discussions. She has previously represented the U.S. at global forums, including at the W-20 summit in Germany in April, which focused on promoting equal gender workforce participation. She also championed a new $325 million World Bank loan program aimed at supporting female entrepreneurs in developing countries that launched in July.

Trump’s attendance is also a statement of support to India from an American administration that has prioritized personal relations with world leaders. Indian Prime Minister Narendra Modi, who will open the GES and host a gala dinner, told President Trump that he looked forward to “showcasing innovation and collaboration between India and the United States” last week, Reuters reported.

How Is Hyderabad Preparing?

Upon Trump’s arrival in Hyderabad, a centuries-old capital that has evolved into a regional technology hub, she will see a city that worked hard to tidy up its image. Over the past few weeks, police have reportedly cleared out hundreds of beggars and rounded up street dogs, according to the Guardian, though officials have denied local media reports claiming that stray dogs had been euthanized. Authorities have also taken more cosmetic efforts to beautify the city, scrubbing streets, fixing potholes and painting bridges in rainbow colors, the Guardian reports.

Hyderabad has used Trump’s attendance to publicize the event, posting her likenesses on billboards along major roadways and installing mannequins of President Trump, his daughter and her husband Jared Kushner throughout the city. The “Ivanka effect” seems to have been a success: Organizers reportedly received 44,000 applications for 400 attendance slots designated for Indian firms, according to the Times of India.

Will She Address Garment Factory Conditions?

Ivanka’s role at the GES has also raised questions about her own clothing and lifestyle brand, which is exclusively manufactured in garment factories in lower-income countries including India, Bangladesh and China, according to the Washington Post.

The company’s reliance on overseas manufacturing clashes with President Trump’s support for U.S. manufacturers as well as Ivanka’s own #WomenWhoWork social media campaign and her latest book, which promotes professional empowerment and financial independence for women. Young, low-skilled women constitute the majority of India’s garment sector, where they make about $4.60 to $4.70 per day, according to data from the Indian government and the Clean Clothes Campaign cited by the Post.

A Post investigation also found that Trump’s brand, which generated $100 million in retail revenue in 2016, failed to match up to industry standards of inspecting supply chains. Earlier this month, 23 labor, gender, and rights groups signed an open letter to Ivanka requesting that her brand disclose suppliers and open their facilities to independent monitors. 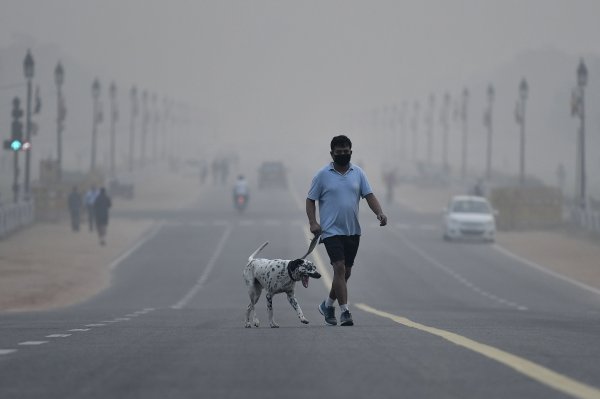 New Delhi Hopes for Rain to Wash Away Choking Smog
Next Up: Editor's Pick