A Detailed History of Prince Harry and Meghan Markle's Relationship

Prince Harry, Britain’s most eligible bachelor, is no longer quite so eligible following the announcement of his engagement to California-born actress and United Nations advocate Meghan Markle.

The newly-engaged pair, who revealed their engagement on Nov.27, dated for at least 15 months before Prince Harry popped the question. Despite having their relationship under heavy scrutiny by the international press, the couple has made a valiant attempt at keeping their romance as private as possible, appearing in public just a handful of times together since confirming their union.

Here’s what you need to know about the royal relationship on everyone’s lips:

How did Prince Harry and Meghan Markle meet?

Prince Harry, 33, and Los Angeles-born Markle, 36, met for the first time in London in July 2016, when they were introduced by a mutual friend, Markle confirmed in an interview with Vanity Fair in September.

How long have Prince Harry and Meghan Markle dated?

A close friend of Harry’s confirmed to PEOPLE in late October 2016 that the pair had been dating seriously for around two months, meaning as of Nov. 2017 the pair have been together for roughly 15 months.

On Nov. 8 2016, the Royal Kensington Palace released a public statement in which Markle was referred to as Harry’s girlfriend for the first time. The unprecedented statement condemned the “wave of abuse and harassment” Markle had been subjected to. “Prince Harry is worried about Ms. Markle’s safety and is deeply disappointed that he has not been able to protect her,” it said. “It is not right that a few months into a relationship with him that Ms. Markle should be subjected to such a storm.”

When have Prince Harry and Meghan Markle appeared together in public?

Prince Harry and Markle were photographed in public together for the first time in Dec. 2016, shopping for a Christmas tree at the Pines and Needles store in London. A few days later they were spotted while on a date to see the hit play The Curious Incident of the Dog in the Night-Time in London’s West End. The week before, Harry had made a 1,700-mile detour from his tour of the Caribbean to visit Markle at her Toronto home.

Markle attended her first public event with Harry in May this year, at the Coworth Park Polo Club in Ascot, England. Later that month, she attended part of the wedding of Kate Middleton’s sister, Pippa, to financier James Matthews. Harry was photographed driving the actress into the Middleton home later that day after picking her up from London after the ceremony. In March, Markle joined Prince Harry at a wedding in Jamaica for one of his close friends.

The pair made their first public appearance together at the opening ceremony of the international Invictus Games in Toronto, Canada, in September. They held hands at a wheelchair tennis event and spent time with Markle’s mother, Doria.

What have they said about each other?

Markle commented on her relationship for the first time in September, in her interview with Vanity Fair in which she referred to Harry as her “boyfriend” numerous times. “We’re a couple,” she told the magazine. “We’re in love. I’m sure there will be a time when we will have to come forward and present ourselves and have stories to tell, but I hope what people will understand is that this is our time.”

She added: “This is for us. It’s part of what makes it so special, that it’s just ours. But we’re happy. Personally, I love a great love story.”

Prince Harry has not commented about the relationship quite as candidly as Markle; however, he did tell competitors at the Invictus Games in September that his girlfriend was “loving” the event. “I asked him how his girlfriend was enjoying it and he said ‘she loves it, she’s loving the games,’ which is awesome,” former U.S. air force master sergeant Kyle Burnett told reporters. It was the first time the Prince publicly spoke about Markle following the strongly-worded statement the Kensington Palace issued in November.

The pair have hinted at their feelings towards each other in non-vocal ways. In February this year, Prince Harry was seen wearing his half of a matching His & Hers bracelet set on the cover of Town and Country magazine. The resemblance of the blue-beaded piece of jewelry to a bracelet Markle was pictured wearing on her Instagram page two months before was no coincidence.

What will Prince Harry and Markle’s wedding be like?

The event will take place in Spring 2018, but details about the nuptials remain under wraps. Prince Harry and Markle could opt for a large royal wedding like Prince William and Duchess Kate’s 2011 nuptials or choose a low-key ceremony somewhere outside of London, such as St. George’s Chapel at Windsor Castle, where Harry’s father, Prince Charles, had a service of blessing with his second wife, Camilla Parker Bowles, in 2005.

As for the honeymoon, Antigua’s Prime Minister invited Harry to spend his honeymoon on the Caribbean islands of Antigua and Barbuda during a visit in Nov. 2016 (making the royal turn “bright red,” according to sources on the ground). Sadly, the islands were badly hit by this year’s hurricane season so the royal couple might have to look elsewhere. 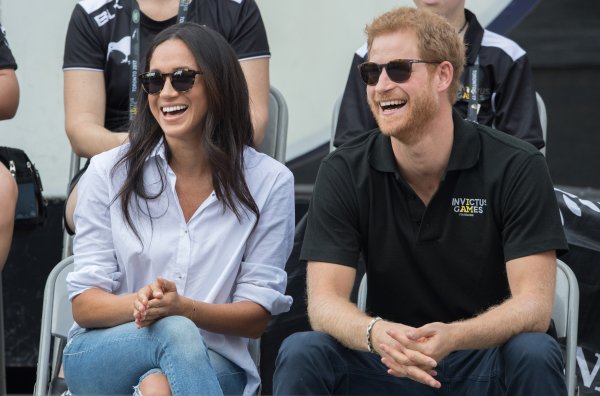 Prince Harry and Meghan Markle Are Officially Engaged
Next Up: Editor's Pick