(BEIJING) — Police in China are investigating claims of sexual molestation and needlemarks on children at a Beijing kindergarten run by pre-school operator RYB Education Inc, the latest case in a booming childcare industry to spark outrage among parents.

The official Xinhua news agency said in a news report late on Thursday that police were checking allegations that some teachers and staff had abused children, who were “reportedly sexually molested, pierced by needles and given unidentified pills”.

Parents said their children, some as young as three, relayed troubling accounts of a naked adult male conducting purported “medical checkups” on students, who were also unclothed, other media said.

Some parents who gathered outside the school in the capital, to demand answers on Thursday, said their children gave matching accounts of being fed unidentified tablets and of punishments where students were “made to stand” naked in class, media said.

The welfare of children in professional care has become a hot-button issue in China, where a string of high-profile cases of abuse has underlined lax regulations and supervision in the childcare and early learning industry.

“We deeply apologise for the serious anxiety this matter has brought to parents and society,” RYB said in a statement on its official microblog on Friday, adding that it was helping authorities.

The school’s principal had lodged a police report against “individuals who have engaged in false accusations and framing”, it said, without elaborating.

Beijing police did not immediately respond to a faxed request for comment.

China’s education ministry has begun a special investigation into the operation of kindergartens, it said in a statement on Thursday, and told education departments nationwide to “take warning from these types of incidents”.

Separate incidents in China of children being slapped, beaten with a stick and having their mouths sealed shut with duct tape have also gone viral and fueled anger online.

News of the investigation into the Beijing kindergarten triggered a wave of outrage on social media, with more than 76 million mentions of “RYB” on Tencent Holdings Ltd’s WeChat messaging service on Thursday.

“These may be individual cases but the deeper problems they reflect cannot be overlooked,” a Xinhua editorial said. “Laws must be enforced, supervision strengthened, teacher wages increased, the childcare industry cannot be allowed to grow in an uncivilized fashion.”

China Central Television (CCTV) broadcast images of police and angry parents gathered outside the school in Beijing, calling for answers.

RYB, which listed in New York in September, says on its website it runs a network of more than 1,300 directly owned and franchised play-and-learn centers and nearly 500 kindergartens for children up to the age of six, in about 300 cities and towns around China.

The investigation follows the emergence this month of videos showing teachers at another kindergarten in the commercial hub of Shanghai physically abusing and force-feeding infants.

Chinese education providers have been attracting major investment, while others have sought global listings, latching onto fast-growing demand from parents for high-end education services. 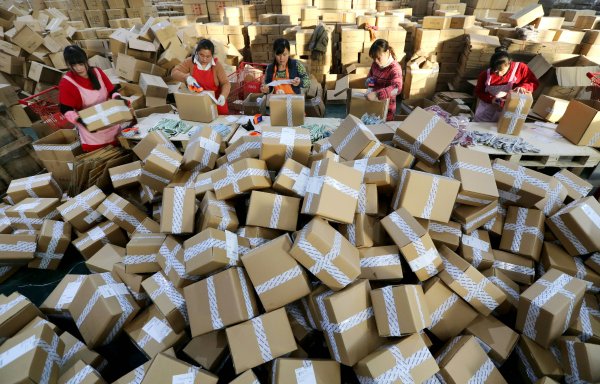 China's Singles' Day Could Set Crazy Records in 2017
Next Up: Editor's Pick