Royals behind the wheel!

Prince William and Kate Middleton had a day of fun when they took a ride in an off-road vehicle and attended a training session for the prince’s favorite soccer team on Wednesday.

The couple, who are expecting their third child in April, also met with mountain rescue teams who were training on Land Rovers at a factory in Birmingham, England – and joined in with the exercise.

Kate braved the windy elements in a chic black coat dress with cream trimming from Goat — an outfit she also wore during a 2014 trip to New York when she was pregnant with Princess Charlotte. (Shop a similar look here!) She sported knee-high Russell & Bromley boots and accessorized the look with her go-to Kiki McDonough yellow gold diamond leaf earrings.

Their first meeting of the day was at Jaguar Land Rover where they met with staff and apprentices who work at the plant as well as the company leaders. Former helicopter pilot William is a key supporter of mountain rescue organizations around the country and worked closely with them in Wales when he was a search and rescue pilot in the Royal Air Force during the first years of the couple’s marriage.

Then they got in on the action when William took the wheel with Kate riding shotgun. The rock crawl is designed to test the capability, suspension, grip and camera technology of the new vehicles.

However, pregnant women are warned on the company’s website that the course may not be unsuitable for them. It is not known if Kate was aware of the guidance, but she was all smiles as they navigated the course.

At the Land Rover plant they also met with some of the company’s volunteers who back projects that focus on regeneration, education, young people and the environment.

The royals then headed to a familiar place for the prince – Aston Villa’s soccer ground. William has been a fan of the team since he was a young boy and the stadium was the setting for a meeting of the royals’ Coach Core mentoring program that helps create inspirational young coaches. Young coaches and tutors worked with local students during the session on the Villa Park soccer field.

As they arrived, Aston Villa’s Chief executive Keith Wyness greeted Kate with “Welcome back to the home of one of your husband’s other passions.” Kate replied, “Yes, he’s very excited by it!”

William, who last visited the stadium to watch a game in November 2013, said, “It’ll be interesting to see if she’s listened to any of my conversations about football!”

Last month, the couple and Prince Harry hung out with apprentices of their program in London, as they honored the latest young people to graduate the program.

Players from London-based team West Ham used the occasion to hand over a jersey for Prince George and Princess Charlotte – but joked that with their dad’s allegiance he might not want them wearing them!

Their visit comes two days after they joined Harry and the rest of the royal family to celebrate Queen Elizabeth and Prince Philip’s 70th wedding anniversary.

The couple will end the day in Birmingham, 125 miles north west of London, touring the workshop of Acme Whistles where whistles are made for police and sports referees. The family-owned business creates 115,000 whistles every week. 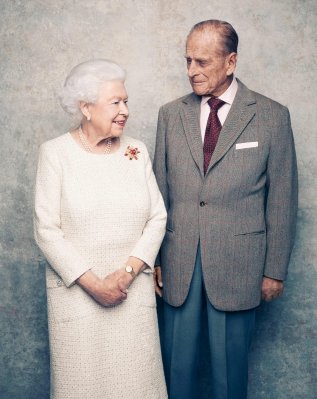