Yemen Could Be Out of Food in Six Weeks, Aid Official Warns

People search through the rubble of houses at the site of a Saudi-led airstrike near Yemen's Defense Ministry complex in Sanaa, Yemen, on Nov. 11, 2017.
Hani Mohammed—AP
By Elizabeth Dias

Johan Mooij expects food supplies in Yemen’s capital of Sana to run out in about six weeks. Mooij is the Yemen country director for CARE, one of several dozen humanitarian groups working with the United Nations to distribute food to millions of people in Yemen.

Even before Saudi Arabia blockaded Yemen two weeks ago, the situation was deteriorating. Now, he warns of disaster. “People are getting really worried,” says Mooij, who is based in the capital.

Fuel is also scarce, Mooij says, so the deep water wells cannot run. The lack of clean water is raising fear of a worsening cholera epidemic that has already hit a million people. “Prices for fuel have gone up 160%,” he says. “The price of water has doubled in the past couple days.”

The humanitarian crisis in Yemen continues to worsen since the Saudi-led blockade of the country began two weeks ago. A Saudi-led coalition, supported by the U.S., has been fighting Houthi separatists in Yemen for three years, and on Nov. 5, Saudi Arabi closed air, land, and sea ports to seal off the country. United Nations officials have said that seven million people face risk of famine and called the situation “catastrophic.” Saudi Arabia said it would open some ports last week, but aid workers like Mooij continue to report difficulty. The U.N. has said its staff has not been able to move though Sana since the blockade. At least seven million people rely on the U.N. and other NGOs for food aid.

“We feel very strongly that the U.S. is best positioned to talk with Saudi to push them to find ways to open the border,” Mooij says. “There are very few governments that have access to the Saudi’s.”

A spokesperson for CARE says their humanitarian and human rights coalition has not yet received a response for a letter it sent to Secretary of State Rex Tillerson on Nov. 13, urging him to work to end the blockade. The eighteen other signatories of the letter included Oxfam, the International Rescue Committee and Refugees International.

“The United States bears a special responsibility to use all diplomatic means to end ongoing violations against civilians in Yemen and the recent blockade of the country, to obtain concrete commitments by all sides for unfettered humanitarian access, and to secure a ceasefire and resumption of the peace process,” they wrote.

“The breakdown in Yemen of respect for international law and the rapidly worsening humanitarian situation puts millions of civilian lives at risk,” they warned. “Four-fifths of Yemen’s population in need of humanitarian aid, including 7 million at imminent risk of famine.”

CARE has also been working with coalition partners to meet with members of Congress.

The U.S. House of Representatives passed a resolution earlier this month stating that it had not authorized U.S. military support for the Saudi Arabia-led war in Yemen. But the resolution did not call to end current U.S. support, so the step was limited.

On the ground in Sana, Mooij says humanitarians will press on. “We are humanitarians, so we are used to working under difficult circumstances,” he says. “We are on the phone, on Skype, on email, trying to get the world to understand there is a humanitarian crisis going on.” 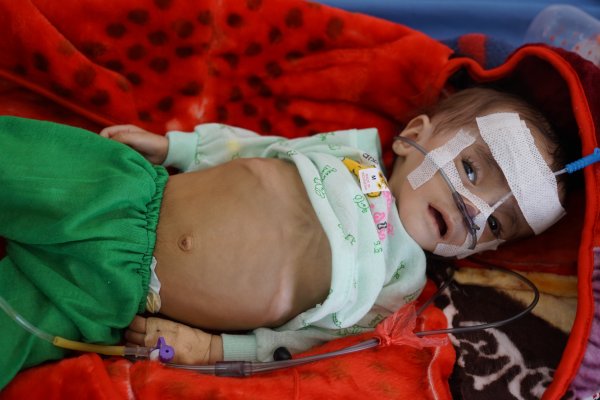 'Lives of Millions' at Risk Under Blockade in Yemen
Next Up: Editor's Pick