These Are All The Politicians Recently Accused of Sexual Harassment

Ever since the New York Times report nearly two months ago that Hollywood mogul Harvey Weinstein had amassed decades of sexual harassment allegations, multiple people — mostly women — have come forward to share their own stories. (When the story first broke, Weinstein initially told the Times, “I appreciate the way I’ve behaved with colleagues in the past has caused a lot of pain, and I sincerely apologize for it. Though I’m trying to do better, I know I have a long way to go.”)

These stories transcend industries and professions, and politics is no exception. In the weeks since the story broke, both the Republican and Democratic party have been rocked by allegations of harassment as women detail their treatment from prominent politicians.

The Alabama Senate race that once seemed like a lock for Republicans is now up in the air, and Congress has mandated sexual harassment training.

Here are the politicians on the national stage — who have served, are serving, or are currently to serve in any branch of federal government — accused of sexual harassment or sexual misconduct since the Weinstein story broke.

Eight women have come forward alleging that the 41st President groped them at various events dating back to the 1992 presidential campaign.

The first accusations came from two actresses, Heather Lind and Jordana Grolnick, who alleged that Bush had grabbed their behinds when posing for a photograph with them. Bush’s spokesman, Jim McGrath, did not deny the allegations, and explained in a statement that Bush did not mean to offend anyone and was trying to put the women at ease, because he was in a wheelchair and can only reach so high when posing for pictures.

“At age 93, President Bush has been confined to a wheelchair for roughly five years, so his arm falls on the lower waist of people with whom he takes pictures,” McGrath said. “To try to put people at ease, the president routinely tells the same joke — and on occasion, he has patted women’s rears in what he intended to be a good-natured manner.”

However, allegations from a time when Bush wasn’t wheelchair bound also surfaced. Roslyn Corrigan, for instance, told TIME she was sixteen in 2003 when she met Bush at a CIA event in Texas, and he grabbed her buttocks without her consent. Shortly after Corrigan came forward, another woman, who declined to be identified, told CNN Bush had groped her in 1992, when he was still President, and a broadway actress, Megan Elizabeth Lewis, told NJ Advance Media Bush groped her after a performance in Houston in 2009.

McGrath declined to comment on this allegation from 1992 and did not respond to the one from 2009. Regarding Corrigan, he told TIME, “George Bush simply does not have it in his heart to knowingly cause anyone harm or distress, and he again apologizes to anyone he may have offended during a photo op.”

88-year-old Michigan Congressman John Conyers, who has served in the House of Representatives for over 50 years and is the ranking member on the House Judiciary Committee, reportedly reached a settlement with a staffer who said she was fired because she rejected his sexual advances.

Through a spokesperson, Conyers denied the allegations, although he acknowledged that a settlement had been reached. “My office resolved the allegations – with an express denial of liability – in order to save all involved from the rigors of protracted litigation. That should not be lost in the narrative. The resolution was not for millions of dollars, but rather for an amount that equated to a reasonable severance payment,” the statement explained.

Conyers had initially told the Associated Press he did not know anything about the allegations. A spokesperson for Conyers, however, said that he thought the AP reporter was asking him about recent allegations, which he didn’t know about.

On Dec. 5, Conyers announced that he wouldn’t run for re-election, but again denied the allegations. “My legacy can’t be compromised or diminished in any way by what we’re going through now. This too shall pass,” Conyers said. “My legacy will continue through my children. I have a great family here, especially in my oldest boy, John Conyers III, who I endorse to replace me in my seat in Congress.”

Colorado Congresswoman Diana DeGette told MSNBC on Monday that former Congressman and San Diego Mayor Bob Filner had tried to pin her to the door of an elevator and kiss her, but she pushed him away.

Filner served in Congress from 1993 to 2012, when he became Mayor of San Diego. He resigned from the mayorship after one year amid sexual harassment allegations.

“I was trying to establish personal relationships,” Filner said at the time. “I sincerely apologize to all of you. … For the part that I have played, for putting the city through a difficult time, I apologize.”

That October, Filner pleaded guilty to to false imprisonment and battery charges that were related to the sexual harassment allegations, according to the New York Times.

Leeann Tweeden, a model, sportscaster, and radio host, described in a November 16 blog post how in 2006, Franken, who was not yet a Senator but working as a comedian, forced her to kiss him, and then groped her while she was asleep. At the time, they were on a USO tour in the Middle East, which Franken was headlining.

Franken apologized for the photograph, but said he recalled the incident differently. “I don’t know what was in my head when I took that picture, and it doesn’t matter. There’s no excuse. I look at it now and I feel disgusted with myself. It isn’t funny. It’s completely inappropriate,” he said in a lengthy statement. “While I don’t remember the rehearsal for the skit as Leeann does, I understand why we need to listen to and believe women’s experiences.” Franken also joined multiple senators calling for an ethics investigation into his conduct.

In the weeks since Tweeden’s blog post, seven other women have come forward with similar allegations against Franken. On Dec. 6, led by a few Senate Democratic women, a total of 23 Senate Democrats called on Franken to resign. Franken announced in a Dec. 7 speech on the Senate floor that he would resign in the “coming weeks.” Franken said that some of the claims against him “are simply not true,” while others he remembers “very differently.”

“I of all people am aware that there is some irony in the fact that I am leaving while a man who has bragged on tape about his history of sexual assault sits in the Oval Office and a man who has repeatedly preyed on young girls campaigns for the Senate with the full support of his party,” he said. “But this decision is not about me. It’s about the people of Minnesota. And it’s become clear that I can’t both pursue the ethics committee process and at the same time remain an effective senator for them.”

On Nov. 9, the Washington Post reported that the Republican Party’s Alabama Senate candidate had pursued relationships with teenagers when he was in his thirties, citing interviews with four women who spoke about their experiences: Leigh Corfman, Wendy Miller, Debbie Wesson Gibson, and Gloria Thacker Deason. One week later, another woman, Beverly Young Nelson, said that Moore had pursued her when she was a teenage waitress in Alabama and he was a district attorney, locking her in his car one night and trying to kiss her, push her head toward his crotch and take her shirt off.

Young and her attorney Gloria Allred held up her yearbook containing a signature from Moore which read, “to a sweeter, more beautiful girl I could not say Merry Christmas. Love Roy Moore, D.A.”

Two days after Nelson came forward, another woman, Tina Johnson, told AL.com that Moore had groped her when she was 28. That same day, the Post published a story with two more accounts of women alleging that Moore had made sexual overtures towards them when they were teenagers.

In total, eight women have come forward with allegations against Moore, which he and his campaign have claimed are politically motivated. Moore outrightly denied the first five allegations that emerged, although he acknowledged knowing Deason and Gibson in an interview with Sean Hannity. But he did not directly address the other three, only categorizing them as a “political farce.”

His campaign has also requested that Allred publicly release Nelson’s yearbook so they can verify the signature as Moore’s.

The House Ethics committee announced on Dec. 7 that it was launching an investigation into the Texas Republican a week after Politico reported he used taxpayer money to settle an $84,000 sexual harassment lawsuit filed by his former communications director Lauren Greene in 2014.

Greene alleged that Farenthold “regularly drank to excess” and told her that he and his wife hadn’t had sex for years, and said an aide told her Farenthold said he had “sexual fantasies” and “wet dreams” about her. Farenthold denied wrongdoing at the time, according to Politico.

On Dec. 4, Farenthold said he would pay back the settlement. “Even though I was completely exonerated by [the Office of Congressional Ethics] and the settlement agreement has been paid, I am doing my best and am going to hand a check over this week to, probably Speaker Ryan or somebody, and say, look, here is the amount of my settlement. Give it back to the taxpayers,” Farenthold told KRIS-TV.

The Arizona Republican announced on Dec. 7 that he would resign from the U.S. House of Representatives amid an ethics investigation into allegations of sexual harassment.

“I have recently learned that the Ethics Committee is reviewing an inquiry regarding my discussion of surrogacy with two previous female subordinates, making each feel uncomfortable,” Franks said in a statement. “I deeply regret that my discussion of this option and process in the workplace caused distress.”

“I have absolutely never physically intimidated, coerced, or had, or attempted to have, any sexual contact with any member of my congressional staff,” he added. 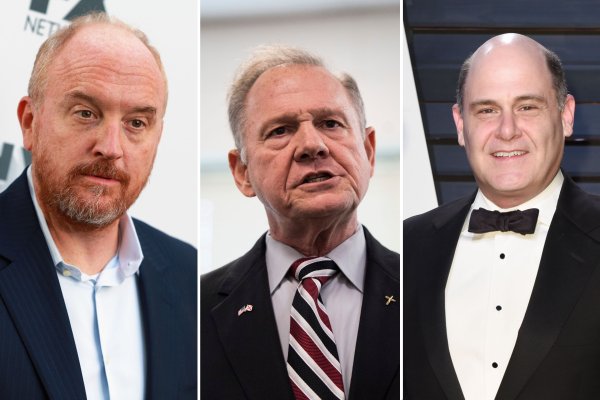 Does Sexual Harassment Training Work? Here's What the Research Shows
Next Up: Editor's Pick