Drumstick and Wishbone have been living it up in Washington, D.C. – but only one has what it takes to be the National Thanksgiving Turkey.

President Donald Trump will pardon one of the gobblers at 1 p.m. on Tuesday at the White House, as part of a tradition that may date as far back as Abraham Lincoln. This ritual will mark the 70th year the National Turkey Federation has presented the president with a turkey.

Trump will either pardon either Drumstick or Wishbone, depending on the results of a poll from the White House. (While just one will be used for the ceremony, both will be spared from the Thanksgiving table.)

The two turkeys appear to be living a life of luxury as they await the ceremony in the capital. Photos of both birds posted on the White House’s Twitter and Instagram accounts showed them staying at the Willard InterContinental Hotel, a five-star hotel just blocks away from the White House.

The tradition has long been a chance for the president to lighten up and show his humorous side. In 1955, then-Vice President Richard Nixon shook hands with the turkey. Former President Ronald Reagan appeared startled as the National Thanksgiving Turkey fluttered its wings in 1984.

During former President Barack Obama’s tenure in the White House, he used the annual tradition as an ample opportunity to try out his best “dad jokes.” For his final event last year, Obama pardoned both turkeys, Tater and Tot.

Watch this year’s event live in the video above. 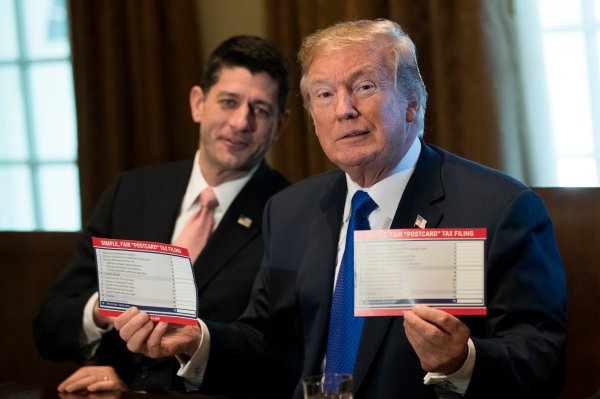