The Argentine Navy said on Monday that noises detected during its search for a missing navy submarine did not originate from the lost vessel.

Argentine navy spokesman Enrique Balbi from Buenos Aires said that they originally suspected the noises of being a distress signal, but an analysis of the sound disproved that hypothesis, according to CNN. Balbi said the sounds could be from ocean or marine life.

Last week, the ARA San Juan reported a failure in its battery system and a short circuit—both routine problems—according to the Navy. The crew of 44 was reportedly safe at the time, instructed to change course, and return from a base in southern Argentina’s Tierra del Fuego archipelago to Mar del Plata. The vessel went missing while changing course, and the last confirmed contact occurred last Wednesday, according to the Navy.

With U.S. Navy assistance, the Argentine Navy is racing against the clock in its search along the Patagonia coast. Without external help, the submarine has enough food, water, and fuel to last 90 days, but it only has enough oxygen to last seven days underwater. In the “worst-case scenario,” Balbi says oxygen could run out in two days.

“This phase of search and rescue is critical,” Balbi said. “This is why we are deploying all resources with high-tech sensors. We welcome the help we have received to find them.” 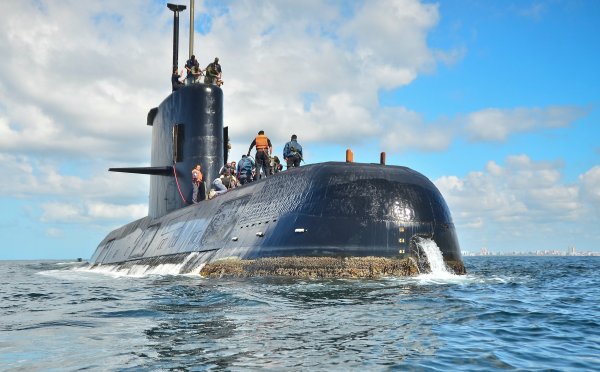