3 Steps White Christians Must Take to Fight Racism and Intolerance

Ideas
By Dr. Jamie Aten
Dr. Jamie D. Aten is a disaster psychologist and disaster ministry expert. He is the founder and executive director of the Humanitarian Disaster Institute at Wheaton College in Illinois.

Once again, America is having a discussion about race and faith the exact wrong way.

The recent news that the head of the Department of Homeland Security’s Center for Faith-based and Neighborhood Partnerships made disparaging comments about black and Islamic communities showed an attitude that is unacceptable and wrong.

Among other things, Rev. Jamie Johnson said that the black community had turned America’s major cities “into slums because of laziness, drug use and sexual promiscuity” and that “all that Islam has ever given us is oil and dead bodies over the last millennia and a half.”

Johnson resigned, stating that he regretted his remarks, and a Homeland Security spokesman said they don’t represent the agency.

End of story, right? Sadly, that’s where most of the dialogue ends within the Christian community. But white Christians in particular need to take some important lessons from this moment to focus on better ways to combat inaccurate, racist and harmful ideologies.

White Christians need to do more

Disasters disproportionally impact racial and religious minorities who are more likely to suffer greater losses and isolation amidst the recovery process. Overcoming cultural barriers, stigma, and racism during an emergency response is an already difficult task.

The nation witnessed some of these cultural hurdles in the response to New Orleans, when Hurricane Katrina hit the Gulf Coast in 2005, and more recently when Hurricane Harvey hit Texas and Hurricane Maria hit Puerto Rico. The dilemmas already inherent in disaster relief, and compounded by cultural barriers, have now likely been made even more challenging by Johnson’s remarks, which followed President Trump’s “both sides” comments after Charlottesville, pardon of controversial former Sheriff Joe Arpaio and claim that the people of Puerto Rico “want everything to be done for them.”

White Christians must refuse to accept the disparities our country has taken for granted for too long. Before, during, and after disasters strike, it’s our responsibility, as people of faith, to address and work toward dismantling the systemic disparities that negatively impact racial and religious minorities in our nation.

Whether we like it or not, Jamie Johnson represents the negative, and all too familiar, stereotype of evangelical Christianity in America. And if we do not pause to take issue with his remarks, we implicitly lend our support to inaccurate, racist and harmful ideologies. Being very clear in our rejection of Johnson’s sentiments is important for all of our relationships, and that includes our relationships with those impacted by disaster.

Disaster response is relational at its core: aid is delivered and received through human interactions. Social bonds are important to the recovery process. Disaster survivors are already subject to receiving aid from “helpers” who may be “other” in any number of ways. Often those who arrive to assist in the wake of disaster are from out of state, and they may also be people whose race, religion, class, and privilege are different from those in need of assistance.

Aid that is truly Christian will reflect the dignity and value of every individual created in God’s image.

Christians must refuse to dilute the Gospel with nationalism

Minority communities are already less likely to trust disaster messaging if they don’t trust the messenger. As a result, those who are conveying the message can be just as important as the message itself.

Though little has been reported thus far, Johnson occasionally leveraged his position as a faith-leader and his disaster relief platform to promote a religiously guised political agenda. On the popular blog site Medium, Johnson wrote, in September, after addressing the annual United Pentecostal Churches International Convention:

“Once I started speaking, it didn’t take long to sense the high level of support that these pastors have for President Trump and his ‘Make America Great Again’ agenda.” Johnson seemed to equate spiritual vitality with support of right wing politics when he wrote, “The atmosphere in the convention hall was electric. At times, it seemed more like an old-fashioned revival service than a denominational business meeting. It was clear during my remarks — and in the half-hour following, when pastors rushed to speak with me about their support for President Trump — that domestic and international events of recent months have strengthened support for the President among these faith-based voters.”

In fact, many Christians of all cultures and ethnicities who are “faith-based voters” do not support the President’s “Make America Great Again” agenda. In response, we must refuse to participate in the dangerous conflation of Christian faith and nationalist ideology.

Sadly, the ugly comments of Rev. Jamie Johnson not only misrepresent the values of many Christians, they also negatively affect disaster recovery by inflicting harm on those who are impacted disproportionately by disasters. As a result, it is incumbent on people of faith to renounce Johnson’s un-Christian assumptions and remarks so that we might be about the necessary work of dismantling the disparities that make minority communities most vulnerable to disaster. 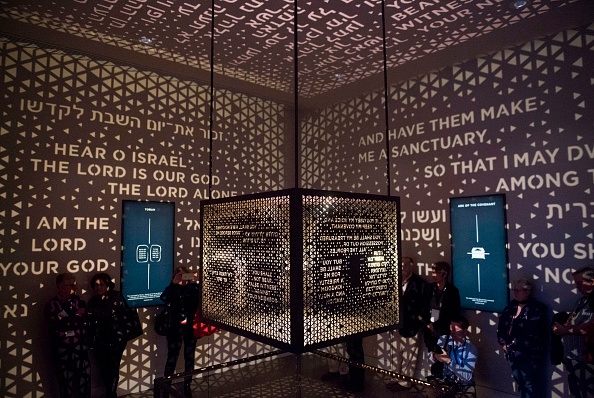 The Family Behind a $500 Million Bible Museum Hopes to Change Washington
Next Up: Editor's Pick