The True Story Behind the Winston Churchill Biopic Darkest Hour

Many know British Prime Minister Winston Churchill as a legendary wordsmith who delivered some of history’s most famous speeches. But the new biopic Darkest Hour, out Wednesday, Gary Oldman depicts him at a loss for words at a time when his people needed words of reassurance more than ever: during a critical turning point in the Second World War.

“One of the real revelations for me was to find how uncertain he was during this period, because history as we’re handed it tells us he was unyielding,” screenwriter Anthony McCarten (The Theory of Everything) tells TIME. “When you look at the manuscripts of those speeches, there is so much crossing out and rewording. As a writer, I could feel that these words didn’t spring whole from his imagination. He had to hack them out of rock, and they didn’t come easily. He was under enormous pressure.”

Here’s a look at that pressure, and other historical context for other key scenes in the film, compiled with the help of the film’s historical advisor Phil Reed, director emeritus of the Churchill War Rooms, and Michael Bishop, Executive Director of International Churchill Society:

Of all moments to focus on in Churchill’s 90-year life, what’s significant about the period of May and June 1940?

If you’ve already seen Dunkirk then you know why that May mattered, and historians consider Churchill’s Jun. 4 speech to Parliament about it —”we shall fight on the beaches…we shall never surrender” — the point at which Brits realized they could win the war. After a failed British attempt earlier that spring to prevent a German advance and a surprise blitzkrieg bombarding Holland and the French-Belgian border, Belgium and Holland surrendered and British troops in France were driven to the beach at the port of Dunkirk. Though war cabinet members prepared to consider peace talks with Nazi dictator Adolf Hitler, in the end — with the help of civilian boats — more than 300,000 British troops ended up getting rescued. That’s why the evacuation — dubbed “Operation Dynamo” — is also known as the “Miracle of Dunkirk.”

Why did Prime Minister Neville Chamberlain step down?

The failures of a campaign meant to stop the German advance in Norway caused a “huge uproar in Parliament and blame was generally thrust at Chamberlain,” says Reed. He becomes seen as “yesterday’s man and not the man to take [Britain] forward.” On top of that, Bishop says, “He didn’t have the temperament” to lead the nation through a world war, and was mainly a peacetime leader. Chamberlain was replaced by Churchill in May of 1940; when he died later that year, Churchill delivered his eulogy.

Why wasn’t Churchill the first choice for Prime Minister?

Bishop points out that Churchill’s appointment was ironic because, as First Lord of the Admiralty, he is seen as largely responsible for the strategic failures of the very campaign that led to Chamberlain being ousted. One favorite for the job was the Foreign Secretary Lord Halifax, considered, as Reed puts it, “a much more straight down middle aristocrat” who was also much much in sync with the monarchy. But Halifax didn’t have enough support from the Labour Party. Meanwhile, Churchill — who had switched parties twice and opposed his own party by not supporting India’s independence from Britain — could muster enough support to cancel out his detractors. “He had built up a reputation for himself over many years,” says Bishop.

So that’s why the King seems so reluctant to invite Churchill to form his own government?

Yes, it would take some time for King George VI to get on Churchill’s side. Churchill had gotten under the King’s skin when he supported his brother Edward VIII’s decision to abdicate to be with the American divorcee Wallis Simpson on Dec. 11, 1936. There was also tension that went even further back, due to lingering disapproval of the Churchill family that dated back to a falling out between the monarchy and his father, the Chancellor of the Exchequer Lord Randolph Churchill, in the late 19th century, according to Reed. “That sort of stuck to Churchill, he had a lot of baggage to fight against,” he says.

What were the Churchill War Rooms really used for?

The set for The Darkest Hour was a recreation of the Churchill War Rooms — a real underground bunker near Parliament that was part air-raid shelter for the War Cabinet members and part map room — but the Prime Minister’s use of it was invented. “There’s a slight inaccuracy because the war rooms, although they were opened at the end of August 1939, were not used by Churchill after he became Prime Minister until September 1940 because there were no bombing raids,” says Reed. “It was meant to be a place he could meet in safety during a bombing raid—although they most certainly weren’t safe.”

Churchill would have had meetings there during the major air raids of the latter part of 1940 and into 1941, and then during the V-weapon raids in 1944 and 1945.

Hardly a scene will go by when the statesman doesn’t have a cigar in his mouth or a drink in his hand. “While he earned vast sums as a journalist, he was always in a financially shaky position because he had tremendously expensive tastes,” Bishop says, between maintaining his country home Chartwell and his taste for the cigars, champagne and fine liquor. “Even though he lived an aristocratic lifestyle, he never became truly wealthy until the publication of his memoirs of the Second World War.”

Which speeches are in the movie?

The pep talk he gave to turn around the mood among his war cabinet can also be found in the memoirs of the Minister of Economic Warfare Hugh Dalton. 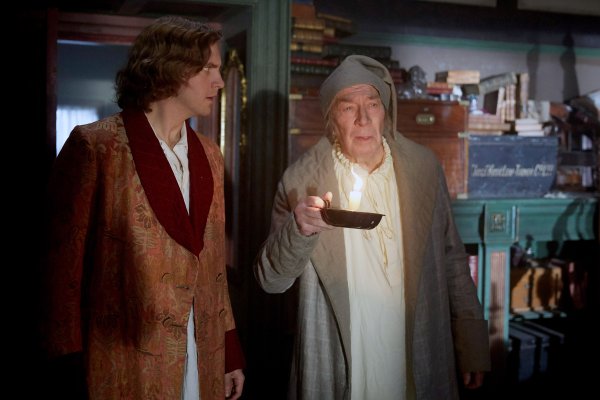 How Charles Dickens' 'A Christmas Carol' Changed the Way the Holiday Is Celebrated
Next Up: Editor's Pick