50 Years Ago This Week: Miniskirts on the Rise

This week’s cover story takes on the literal rise of the miniskirt, the most “visual, persistent and audacious element of the new fashions” of the 1960s. “In the three years since it made its first real appearance in small, offbeat boutiques and far-out discotheques, it has surged onto the campuses, into offices, out on the avenue anywhere at all that youth defiantly chooses to show its colors,” TIME noted. And there was a reason for that surge:

Luckily for them, however, they had designer Rudi Gernreich to do a lot of that inventing. Gernreich was the face of the American miniskirt movement, having seized on the work done by designers like Balenciaga, who left behind the waistline in the 1950s, and Mary Quant and Courrèges, who brought the mod look to London and Paris.

“No one has freed the body like Rudi Gernreich, and I doubt that anyone so overflows with ideas,” said Françoise de Langlade de La Renta, editor of French Vogue.

But perhaps the most striking reminder of what the miniskirt meant in 1967 can be found not within the cover story but at the very front of the issue, in the weekly letter from the publisher. The space often devoted to behind-the-scenes anecdotes is, here, given over in large part to snapshots from the TIME offices, showing a few staffers who wore the new fashion to work. Though the feature later in the issue would take the new style seriously, here it is mostly an excuse to gawk at coworkers’ legs, in an era in which the jobs at the magazine were gender segregated.

“Taken at careful random in our New York editorial offices as this week’s cover story was being edited, the pictures on this page show that a writer’s or editor’s inspiration may be only a glance away,” the text reads. “These girls, who are researchers, secretaries and clerks, show up (nicely) for work every day in their minis. They raise few eyebrows at the office, but one girl was quite an attraction when she went home to Sioux Falls. None of them wear what the story describes as the ‘Hello, Officer’ mini. But Writer Marshall Burchard’s wife does.”

Paying the price: As reported in the national news section, a House subcommittee had helped to expose a serious problem plaguing America’s poorer neighborhoods. Residents there, the investigations revealed, paid more for the same (or worse) groceries than people who lived in wealthy areas. “Making the arithmetic even more onerous is the fact that people in the slums spend up to 33% of their income on food v. 23% for all Americans,” the story noted. As the nation struggled to recover from the summer’s riots, the issue was front of mind — but, 50 years later, it persists.

Black pride: This week’s TIME Essay looks at what it described as a “slow, subtle but steady shift” in the national mood among the African-American population, as the decade’s Black Power movement matured. The shift could be seen as a move toward a new center, in which nonviolent activists and their more militant brethren came together in a movement that emphasized pride, self-sufficiency and true equality — even as the Black Power movement retained its radical reputation. “This kind of Negro is not antiwhite; he is pro-black,” the story noted. “As one direct consequence of his attitude, America’s most visible minority is more visible than ever.”

At Dak To: From Vietnam came the report of U.S. troops taking possession of Hill 875 at Dak To. Over the course of three weeks, per TIME’s early count, the official body count came to 1,599 North Vietnamese troops, which was estimated to be as little as a third of the real cost of the battle on that side, and 150 U.S. paratroopers killed.

…and at home: As the war in Vietnam grew, so did the unprecedented role of television in communicating the facts of that war to the American public. “TV, in short, has brought a new and gripping dimension to war. Combat in living color is often wanting in perspective but rarely in impact,” TIME noted. The result, one sociologist theorized, would be a polarization of sentiment, as those who opposed the war saw evidence to support their belief that it was time to end the conflict, and those who supported it saw evidence of losses that ought not be in vain.

Optimism misplaced: Here in 1967, Congo’s president Joseph Mobutu was praised for having “laid at least the foundations for a more stable and efficient country.” When he died in 1997, having changed his name to Mobutu Sese Seko, he was assessed by TIME as a “strongman and kleptocrat” who ruled by “looting his resource-rich country, leaving it bankrupt and impoverished.”

Great vintage ad: An appropriate pick for a design-focused week: an Eames-chair-focused ad.

Coming up next week: Bonnie and Clyde 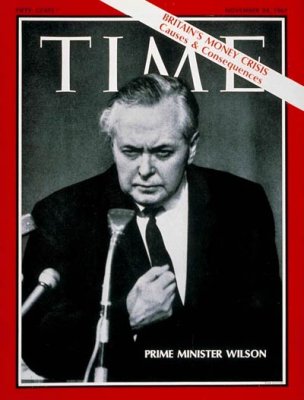 50 Years Ago This Week: Britain's Money Crisis
Next Up: Editor's Pick