Review: Mudbound Tells a Purely American Story, With Our Painful History of Racism at the Center

Ensemble casts are the ghost ships of awards season, group feats of skill and subtlety that pass almost unnoticed on the rolling, choppy seas of Oscar hype. All moviegoers, critics included, tend to zoom in on individual performers — it’s natural to find yourself drawn to just one face, one distinctive way of moving or talking. But watching a movie in which all the players are perfectly in concert is its own special pleasure, and that’s the case with Dee Rees’ Mudbound. Each actor here — in a cast that includes Jason Mitchell, Mary J. Blige and Carey Mulligan — is attuned to the specific gifts of the others. Together, they’re a reminder that actors’ key tools are the ability to listen and see, and not just react.

Mudbound — which was adapted from Hillary Jordan’s 2008 novel by Rees and Virgil Williams — is an intimate epic about two American farming families, one black and one white, working the land in the Mississippi Delta in the 1940s. Laura McAllan (Carey Mulligan) is young wife and mother who’s dragged away from Memphis city life by her domineering husband, Henry (Jason Clarke), an engineer who decides he wants to return to his farming roots. On a portion of the McAllans’ spread live the Jacksons, tenant farmers whose ties to the land go back generations; by all rights, they own it, though they have no deed to prove legally that it’s theirs.

So Hap Jackson (Rob Morgan) and his wife, Florence (Blige), just keep working the land, hoping to save enough to someday buy their independence. They’re also raising a family: The oldest is Ronsel (Mitchell), who, stoking his mother’s greatest fears, goes off to war. Stationed in Europe — he’s a member of the 761st Tank Battalion, also known as the Black Panthers, made up largely of black soldiers — Ronsel faces different hardships than the ones he grew up with, but he also finds a new sense of freedom. When he returns home, readjusting to civilian life is hard enough, but dealing with Stateside racism is harder still. He finds a friend and comrade in Henry’s brother, Jamie (Garrett Hedlund), a pilot who has also just returned from the war and is suffering from what we’d now call PTSD, though the men of his era had no convenient name for it.

Mudbound works as a thumbnail picture of midcentury American racism and injustice, and as a reminder of how slowly things really change in this country, as much as we like to think of ourselves as progressive thinkers and lovers of freedom. But you can’t just write ideas on the screen: Your performers have to embody them, and there’s not a minute in Mudbound that doesn’t feel deeply felt and believable. Rees, who previously wrote and directed the 2011 coming-of-age drama Pariah, has shaped the material beautifully: This is just a good story, period, and Rees never loses sight of that. It’s told from the shifting points of view of each of its major characters, but it never feels cluttered or confusing. And the movie’s sense of history is woven tightly into its landscape. At one point Mulligan’s Laura reflects, in voice-over, on the muddy bleakness of her surroundings (“I dreamed in brown”), and Rachel Morrison’s cinematography provides the visual evidence. Morrison makes this world look both enduring and unsettling, the kind of place whose spirit creeps into your bones. Although Mudbound is being released in select theaters, it’s also available on Netflix, and its complex visual beauty works even on the small screen.

And still it’s the faces of Mudbound that really stick with you. Mulligan’s Laura, a deeply unhappy country wife, wears her tired beauty like a kind of fortitude: She’ll get through this life if it kills her. But at least Laura is white. Florence’s life is even harder, and filled with bigger roadblocks. As Blige plays her, she’s a woman who sees everything around her — beauty as well as cruelty—with the utmost clarity, though she never gives in to martyrdom. Morgan is deeply touching as Hap, the patriarch who wants to do everything possible for his family, pushing himself well past his physical limits. Hedlund and Clarke are terrific as brothers linked by blood but seemingly little else. And Mitchell — who was so marvelous as Eazy-E in the 2015 Straight Outta Compton — is superb here, as a young man struggling with what it means to be at home within his own heart, and within his country. Mudbound — tough and bittersweet and, in places, painfully brutal — is all about what it really means to be an American. If you’re doing it right, it doesn’t come easy — and it costs some people more dearly than others. 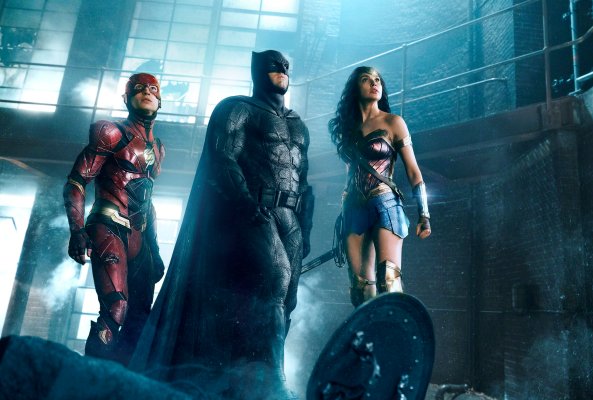 Breaking Down the Justice League End Credit Scenes
Next Up: Editor's Pick