How Sexual Misconduct Scandals Are Already Reshaping the 2020 Democratic Primary

When Democrats began debating who should face President Trump in 2020, one interesting name cropped up a few times: Al Franken.

The Minnesota senator was touted by a few associates and pundits as a potential neutralizer, someone whose show-business past and pugilistic tendencies could offset Trump’s advantages on stage while still having the policy chops Democratic voters want.

Franked eventually said he wasn’t interested, but this week’s news that he groped Los Angeles talk radio host Leann Tweeden in a photo and her claim that he forcibly kissed her during rehearsal for a USO tour in 2006 would have made the race even tougher, analysts say.

That’s because Trump’s election and the recent allegations and revelations about Hollywood mogul Harvey Weinstein and other powerful male celebrities, politicians and journalists have led to a dramatic reaction among Democratic women.

“The election results have had a galvanizing result among women across the country. We’ve seen a record number of women running for office and giving political donations,” Tory Brown, a partner with the Pastorum Group, a progressive political advisory firm, tells TIME. “The narrative about the election had been: Hillary had this in the bag … she won the popular vote and was denied the presidency.”

“It felt like all the times that a bully or harasser had gotten the job promotion over all of us,” she added. “It felt very familiar to women. I wasn’t necessarily a Hillary devotee, but to see how the political world has acted in the last year has put an edge on things.”

This is not mere speculation. The Virginia gubernatorial election on Nov. 7 saw Democratic candidate Ralph Northam crush his Republican opponent, the born-again Trumpian Ed Gillespie, in a landslide — thanks in large part to a groundswell of suburban Democratic voters, nearly 70% of whom voted for Northam. (The turnout, its highest in two decades, saw an uptick in unmarried women, young people, and minorities.)

Elections elsewhere in the country saw a wave of women taking office: the mayoral elections in Charlotte and Seattle, for example, and the state legislative contest in Virginia, where Danica Roem trumped her conservative opponent, who had a deep anti-LGBT record, to be come the first transgender state lawmaker in U.S. history.)

In Alabama, the Christian conservative Senate candidate Roy Moore faces new allegations that he conducted a series of inappropriate affairs with underage women. Before the allegations surfaced in the Washington Post, Moore was the clear frontrunner; now, he’s eight points behind Democratic opponent Doug Jones — again, thanks in part to a mobilization of women voters, who have rallied behind the Democrat. (Only 32% of women in Alabama now say they would vote for Moore, according to a recent Fox News poll.)

The backlash against those accused of sexual impropriety threatens to cull the potential playing field in coming elections: if not as a result of a moral reckoning within the U.S. political system, then at least because of the potential optics crisis of backing someone charged with misconduct.

“The specific allegations against Senator Franken seem to doom any prospect of him seizing the Democratic nomination,” Brown tells TIME. “It’s a moment where the Democratic Party needs to get a sense of who has morals and believes in something more than just wins and losses. This is a purifying moment we are facing.”

Of course, the crisis within the Democratic Party — as with the troubles of Hillary Clinton’s campaign last year — transcend mere gender politics. In the national conversation, the party has been torn asunder between moderate centrists like Clinton and their critics on the left, many of whom backed Bernie Sanders in the 2016 primary and decry what they see as the party’s deference to neoliberalism. Party officials will have to reconcile the chasm.

“I wouldn’t say if there’s pressure on the party to nominate a woman — there’s no quota going on,” Dr. Jennifer Victor, a professor of political science at George Mason University, tells TIME. “At the end of the day, they want to appoint someone who’s going to win. But it’s fair to say that there’s something significant happening with respect to gender. In terms of the candidate supply side, there’s greater energy and greater availability of resources for women to consider running for higher office.”

“As far as who should get the nomination in 2020, it’s clear that the #MeToo movement has exposed a strain of toxic masculinity among men in power,” Brown adds. “Democrats should focus on finding a nominee who will inspire average Americans and who will stand up for those of us who have been cast aside. If that’s a woman, then hells yeah.” 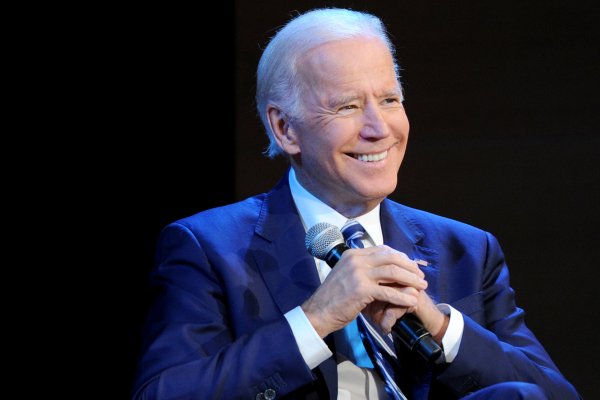 Joe Biden Would Beat Trump in 2020, Poll Says
Next Up: Editor's Pick