What Do We Do When Even the Good Guys Are Bad?

Sen. Al Franken, D-Minn., attends a news conference in the Capitol on the Child Care for Working Families Act, which focuses on affordable early learning and care on September 14, 2017.
Tom Williams—CQ-Roll Call,Inc./Getty Images
Ideas
By Jill Filipovic
Filipovic is a lawyer and writer.

In a month when sexual harassment and assault claims have washed across the U.S. like a tsunami, men across industries and on the left and right alike have been swept up: Harvey Weinstein, Roy Moore, Louis C.K, and now, Al Franken. That last one hurts.

Franken is a comic turned liberal senator from Minnesota. He’s funny, personable, and his politics are solidly feminist. He sponsored bills protecting victims of sexual violence from eviction, and penned a provision of the Violence Against Women Act that would ensure rape victims didn’t have to pay for their own rape kits. He successfully pushed an amendment that barred federal defense contractors from denying rape victims their right to pursue workplace sexual assault, harassment or discrimination claims in court. He attended the Women’s March and spoke at an after-party. Among progressives, there have been hopeful whispers that he’ll run for president and unseat Donald Trump.

And now there’s a photo of him groping Leann Tweeden as she sleeps. There’s Tweeden herself saying he forcibly kissed her.

It’s always easier to condemn sexual assault and harassment when it’s coming from someone you don’t like. For feminists, a dozen sexual harassment and assault claims leveled against Donald Trump weren’t surprising, nor was the video of him boasting about his own penchant for grabbing women’s genitals. It was also easy to condemn. Ditto Roy Moore, a racist and misogynist homophobe: Multiple allegations that he pursued teenagers and molested an adolescent weren’t believable, they were particularly satisfying — of course, many of us thought, a professional moralizer who condemns the consensual sexual behavior of other adults is a massive hypocrite and a sex predator. Harvey Weinstein may have been a donor to our causes, but I can’t think of a single feminist woman who felt any particular affection for him (or even knew much about him). Lots of us liked Louis C.K.’s comedy, but not with the same devotion as many of his white male fans.

But Al Franken. No, he’s not Elizabeth Warren, but a lot of us really love the guy, both for his personality and his politics. Which is why we have to be especially careful not to make excuses or treat his transgressions any differently than we would a Roy Moore or a Donald Trump.

Unlike Moore and Trump, who exploit their political positions to ripple their personal misogyny out to women across the nation, Franken used his elected office to try to make women more equal. He has been a crusader for social justice, trying to ensure that more people who don’t look like him – white and male – have the same rights and opportunities he’s enjoyed. He has championed EMILY’s List, an organization that helps pro-choice Democratic women get elected to office, and spoke at their 30th anniversary gala. He’s a pro-choice NARAL supporter.

For men women who are more conservative and traditional, or those who happily cast their ballots for Donald Trump, this may not be surprising. Men, in many of their worldviews, are simply like this — sexually voracious, genitally irresponsible — which is why we need Christian moral strictures to keep everyone in line. Right-wing critiques of feminism track somewhat along these lines: Feminism and the sexual revolution didn’t so much make women equal to men as it upended a previous system of functional patriarchal authority where sex was expected to be kept in its proper place (marriage). It was a woman’s job to withhold sexual access until marriage (or at least the credible promise of it), which in turn made men behave better – they were forced to curtail their baser instincts and instead channeled their sexual energy into one woman in the confines of marriage, a nuclear unit that also required them to be a financial provider, giving them an additional sense of purpose and identity. This, conservatives argue, was a better deal for women, too: They could pursue their natural inclination to caretaking and maternity under the cover of a protective male partner. We see a version of this in Mike Pence, who reportedly has a policy of not spending time alone with any woman but his wife. Men, the theory goes, are naturally sexually rapacious, and women must take care not to tempt them.

From this perspective, behavior like Franken’s — and Trump’s and Moore’s and Weinstein’s — isn’t a surprising consequence of sexual liberation. Remove female control of male sexual behavior and set men loose to have sex without the attendant requirement that they support a family and of course men are sexually manipulative, abusive, and gluttonous — they are men. That expectation of male sexual incontinence is perhaps why so many Evangelical Christians cast their ballots for Trump last year, and are currently shrugging off molestation charges against Moore (although “Joseph did it to Mary” is a new one).

For feminists, it’s different. We may have reputations as man-haters (the past year has pushed some of us closer to the stereotype), but in reality, most of us see men as human beings, and we see women and men as more alike than we are different. That means we know that women and men alike are capable of being abusive, manipulative and evil, but we also know we’re all capable of treating each other with respect and dignity. We expect men to do just that: Not just to avoid groping anyone (whether we’re sleeping or awake), but more generally to make sure all sexual interactions are mutually enthusiastic. That means listening to “no,” of course, but it also means seeing female sexual desire and agency as just as fundamental as your own. It means only having sex with people who enthusiastically want to have sex with you (and not taking acquiescence as a yes). It means treating coworkers and colleagues as professional equals — obviously that means not treating us like playthings, but it also means mentoring us, and not delegitimizing and undercutting us in the workplace by not taking meetings with us. Basically, we expect men to treat us like people with brains in our heads and a reason to be here, not like sex dolls come to life. And so it’s even more crushing when the men we thought did just that aren’t actually members of Team Good Guy.

So what do we do? I’m not sure we’ve agreed on the level of bad-guy-ness it takes to lose one’s senate seat, but whatever happens to Sen. Franken’s career, it’s time to start replacing these men with women. Women make up just 20 percent of the U.S. senate, and even smaller proportions of other power positions. We’ve been attending college at higher rates than men for more than a decade, and receiving more graduate degrees. We’re more than half the population. There’s no shortage of us, and yet, there are noticeably few of us in the halls of power. Men – even some of the ones we thought were the good ones – have had a good run. We shouldn’t just be taking the bad ones down. We need to start demanding that their replacements are female. 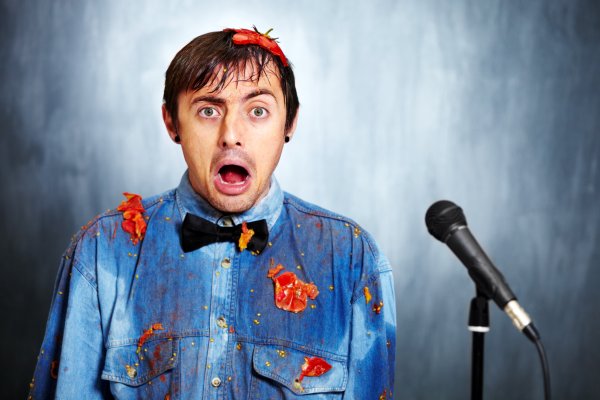 Comedy Needs to Retire ‘It Was Just A Joke’
Next Up: Editor's Pick