Some of the most difficult issues facing us this past year — sexual harassment, police brutality and mental health — surfaced as themes in children’s books and young adult literature. In his first novel since The Fault in Our Stars, beloved YA writer John Green tackled the anguish of living with obsessive compulsive disorder. Angie Thomas, a debut novelist, captured the internal turmoil experienced by a black girl who witnesses her friend’s death at the hands of the police. Jennifer Mathieu created a playbook for a new generation of teen feminists. Here, listed in order of publisher’s recommended reader age, oldest to youngest, are the best reads of 2017 for teens and kids.

Starr Carter, 16, is the only witness in the fatal police shooting of her unarmed friend, Khalil. When she’s called to testify, her carefully separated worlds — the predominantly white prep school where she spends her days and the neighborhood she calls home — threaten to collide. Angie Thomas’s debut novel, longlisted for the National Book Award, draws on the stories and language of the Black Lives Matter movement.

9. Turtles All the Way Down, John Green

The author of The Fault in Our Stars and Paper Towns weaves a tale about the disappearance of a white-collar crook, the $100,000 bounty on his whereabouts and two teen girls set on finding him. Sixteen-year-old Aza Holmes sparks a relationship with the criminal’s son and hunts for the truth while battling debilitating anxiety and obsessive compulsive disorder — a condition shared by Green himself.

8. History Is All You Left Me, Adam Silvera

Silvera broke out in 2015 with More Happy Than Not, about a teen grieving the loss of his father. In his latest, he tackles grief once more. Griffin always imagined he’d reunite with his first love, Theo, the boy with whom he discovered his sexual identity. So when Theo suddenly dies, Griffin is left with a new vision for his future.

In a Texas high school where football players sexually harass girls in the hallways and the administration enforces a dress code steeped in double standards, junior Viv Carter takes a scheme out of her former Riot Grrrl mother’s playbook to fight back. She launches an anonymous zine, Moxie, which soon catches and starts a feminist rebellion at school.

6. I Am Not Your Perfect Mexican Daughter, Erika L. Sánchez

A “perfect” Mexican daughter, in the eyes of Julia Reyes’ family, never strays far from home, behaves conservatively and helps her parents with their work. Julia, unlike her older sister Olga, has no aspirations to be perfect — she wants to escape Chicago, go to college in New York and become a writer. But after Olga dies in a tragic accident, Julia discovers her sister might not have been the girl she seemed.

5. The Stars Beneath Our Feet, David Barclay Moore

Just months before Christmas, Lolly Rachpaul’s older brother is killed in a gang-related shooting, a source of constant pressure for the boys in their Harlem neighborhood. When the holiday rolls around, Lolly and his mother Trini, named for her parent’s home country of Trinidad, aren’t much in the mood for celebration. But a gift from Trini’s girlfriend, a load of Legos Lolly will build into a city, carries the potential to turn things around. Actor Michael B. Jordan is set to make his directorial debut on the film adaptation.

Morrigan Crow is cursed, blamed for her every bad event in her town. At 11 years old, she has only one year left to live — until a mysterious patron arrives to sweep her away to Nevermoor, where she’ll compete in a tournament to join the Wundrous Society for extraordinarily talented children. The only problem is she has no talents, or so she believes. The novel, the first in a series, has drawn comparisons to Harry Potter and will be adapted for film.

3. Over and Under the Pond, Kate Messner (Author), Christopher Silas Neal (Illustrator)

The author and illustrator team behind Over and Under the Snow and Up in the Garden and Down in the Dirt dive underwater to tell the story of the creatures and critters who live in a pond. A boy and his mother paddle a canoe, peering down at otters hunting for tasty mussels and caddisfly larvae slipping under the sand.

In just a few words, brought to life by opulent paintings, Blue Sky White Stars celebrates America, from the landscapes evoked by the red rows and white stars of the flag to the diverse, hopeful faces of its citizens.

1. Here We Are: Notes for Living on Planet Earth, Oliver Jeffers

What is land? Where do we live in the universe? There’s so much to explain to a small child. Jeffers, a best-selling children’s author and illustrator, gets the conversation started with a delightfully illustrated overview of the things he thinks his son ought to know. 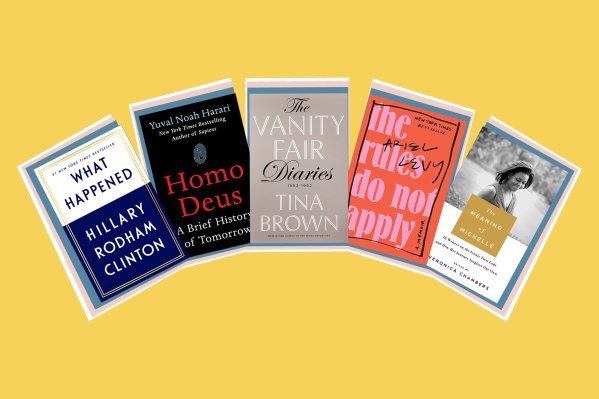