If you’re a fan of either of the two major superhero movie franchises, you should know by now that you’re pretty much required to sit through the credits in order to catch the critical post-credit scenes. So, is there anything at the end of Justice League? In the case of this latest superhero offering, there are two end credit scenes in Justice League that work to spin the DC Extended Universe forward for future films.

Here’s everything we learned from the double whammy of post-credit spots.

OK, so this first scene is actually a mid-credits addition and functions mostly as a gag. But it’s still worth sticking around for. Playing off earlier jokes from the movie, Superman and the Flash egg each other on as they prepare to race from the Kent family farm to the Pacific coast. Putting aside all the one-liners, it’s basically another reminder that anything the other heroes can do, Superman can do better.

In this true post-credits scene, we learn that the now bald Lex Luthor has broken out of the prison where he was locked away at the end of Batman v Superman: Dawn of Justice. Naturally, he’s now plotting evil from the comfort of a private yacht. Cue the entrance of a formidable masked figure that DC Comics fans will recognize as Deathstroke, a.k.a. master mercenary Slade Wilson.

Deathstroke — played by Joe Manganiello — asks Luthor what he wants, prompting a loaded answer from the ever-cryptic billionaire. “To put it plainly,” he replies. “Shouldn’t we have a league of our own?”

This, of course, sets up the Luthor-led Injustice League, a foil to the Justice League that includes villains such as the Joker, Harley Quinn, Scarecrow, Poison Ivy, and, you guessed it, Deathstroke.

Deathstroke is reportedly set to appear in The Batman — Ben Affleck’s solo Dark Knight installment — but there are also rumors of the fan-favorite anti-hero getting a standalone film. Neither of these projects have been given release dates yet.

In the meantime, DC enthusiasts can look forward to the Aquaman movie that is set to hit theaters on Dec. 21, 2018, as well as Shazam!, which will open on April 5, 2019 and stars Zachary Levi as the hero Captain Marvel. 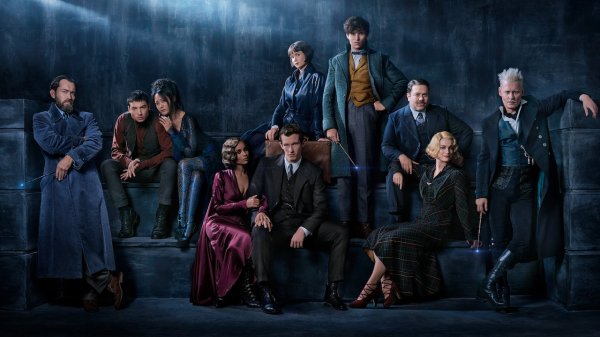 Here's Your First Look at Jude Law as Young Dumbledore in the Fantastic Beasts Sequel
Next Up: Editor's Pick