TIME: What appealed to you about playing Winston Churchill?

Gary Oldman: For me there was a personal element. My mother lived through the Blitz, in London. My father was in the Royal Navy and fought in World War II, so he was obviously under Winston’s command. So it felt like there was a connection. I remember, as a child growing up in London, thinking of Churchill as the man who won the war. He was our savior.

Was it a challenge to play such an iconic figure?

It is a very iconic silhouette you have to work toward. He had the cane, the Victorian clothes, the Homburg hat, the cigar. And many great actors have played him before. So you close your eyes and you say to yourself, Am I really remembering Winston Churchill, or am I being influenced by Albert Finney, or Robert Hardy? So first I had to put all that aside.

There’s the physical challenge too.

The elephant in the room, of course, is that I don’t exactly have a striking resemblance to Winston Churchill. And I wasn’t going to put on 60 pounds to play the role. If I’d been a younger man, perhaps, but I’ve got to look after my health! So I knew it was going to be a long journey, with a lot of time spent in the makeup chair. But the key to it was homing in on the physical details.

I studied newsreel footage of Winston in this period, and I discovered a man who had great energy. He would just charge ahead of everyone, cut through space with this fixity of purpose. He was on a mission. And there were small idiosyncracies: The way he turned the page on his notes. The way he would slide his fingers underneath the lapels of his coat, rather than hold on to them. You look for all of these details and try to soak them up like a sponge.

Did you discover anything that surprised you?

His vulnerability. During the 1940s he would go to bomb sites in London and meet the people going through these hardships. Often he was moved to tears. He could be a real blubberer. The reputation of him as a shouter and a hard taskmaster comes from the fact that he hated Hitler with every fiber of his being. He was on this mission to eradicate fascism. So I think that he had little patience if you came up short of his expectations.

Your performance is already getting Oscar buzz. Have you been happy with the response?

The thing I’ve been most chuffed about is the response from the Churchill family. We got a big thumbs-up from them and from scholars of Churchill. That was nice.

The movie presents Churchill as a politician with a popular touch. Did you see any parallels with today’s political environment, in which populism has made a comeback?

I suppose it has–you certainly saw that with Bernie Sanders. But we didn’t set out to make anything topical or relevant. Of course, if the film resonates with the public and they feel some connection to today, it’s always a good thing. People of every generation are looking for examples of leadership, or real statesmanship.

People in Hollywood are looking for leadership too, in the wake of the Harvey Weinstein scandal. Do you think that will change the culture?

I think it’s already shifted. Hollywood has always been morally a little imperfect, and now we’re seeing it changing incredibly quickly. And it’s permeating all sorts of other industries. Hollywood is in the spotlight at the moment, but the light will shine in other areas. It’s like a turn in the notch on the wheel of evolution. We’re just slowly cleaning up our act. So it’s a good thing, I think. 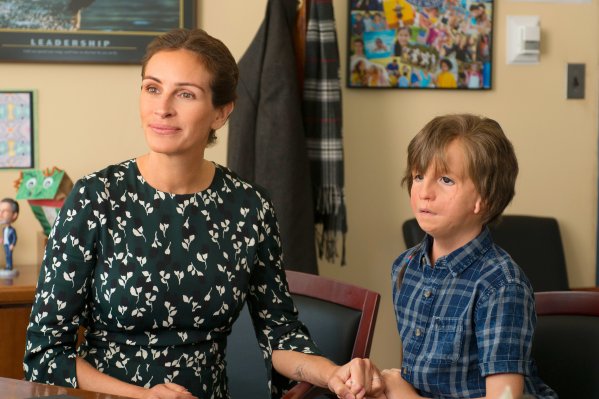 How Wonder Takes on Being Different in an Indifferent World
Next Up: Editor's Pick