For the third year in a row, Star Wars fans will be able to start the holidays with a trip to a galaxy far, far away. And this time for a new kind of adventure. Director Rian Johnson has promised that this year’s installment, titled The Last Jedi, will be darker. Here’s what to expect: Budding Jedi Rey (Daisy Ridley) finds her idol, Luke Skywalker (Mark Hamill), isolated and despondent on a faraway planet. Her friend Finn (John Boyega) comes out of a coma questioning whether he should continue to fight in the rebellion. And General Leia (the late Carrie Fisher, in her last Star Wars film) is mourning the loss of Han Solo (Harrison Ford).

The Last Jedi, out Dec. 15, will also introduce new characters, including Laura Dern’s purple-haired Vice Admiral Amilyn Holdo and an overeager Rebel mechanic named Rose played by Kelly Marie Tran. As for the rest, the two new actors are reticent to share too much. “The new people will either be leading or misleading the heroes,” Dern says. Tran is a little more revealing, admitting that Rose and Finn may occasionally crack a few jokes. (Tran’s background is in improv, and she is a veteran of the comedy site CollegeHumor.) “John Boyega is very funny, and sometimes we could improvise,” she says. “Is that answer diplomatic enough?”

Very. But it almost doesn’t matter, because this Star Wars is also about something else. If 2015’s The Force Awakens answered the question if it is possible to make a Star Wars that recaptures the charm of the original films and 2016’s Rogue One showed there are interesting stories beyond the Skywalker family saga, this film will tell us what happens when Disney expands its universe to new kinds of characters, played by new types of stars.

Whether Holdo and Rose prove to be good or evil, or funny or stoic, their inclusion in The Last Jedi affirms Disney’s determination to make the Star Wars universe look more like our own. When A New Hope premiered in 1977, Leia was the only female hero. And though she upended stereotypes about princesses–the so-called damsel in distress seized a blaster from Han Solo and shot down Stormtroopers herself–Fisher lamented having little female company on set. The new movies feature female heroes and villains, from Rey to the evil Captain Phasma (Gwendoline Christie). “[Producer] Kathleen Kennedy’s mantra is ‘strong female characters,'” says Dern. That’s surprisingly rare. When Dern won an Emmy for HBO’s Big Little Lies this year, she joked in her acceptance speech, “I’ve been acting since I was 11 years old, and I think I’ve worked with maybe 12 women.”

And Tran is the first major Asian female character in the Star Wars universe. Asian actors rarely get to play supporting roles–let alone a hero–in big-budget Hollywood movies. “When I was growing up, I didn’t see anyone like me in movies. And I wanted to be white for the longest time, because I thought that meant my story would be valid,” she says. “When you’re a kid, you see images on TV and on billboards and in magazines–they all look the same, and you wonder, ‘Why don’t I look like that? And can I change myself to look like that?'”

Tran says her casting in Star Wars represents a shift in the industry, though it may take a few more years for other studios to catch up. She takes the opportunity seriously. Despite having trepidations about social media, she recently decided to join Instagram. “I was afraid of being picked apart,” she says. “Being able to fail anonymously is such a luxury. But I realized that if I am in this franchise, I have to have a voice, and that includes speaking out on social media.” One of Tran’s first posts came on Halloween: she and a friend dressed up as porgs, the adorable puffin-like creatures featured in the new film.

Both Tran and Dern were awed to be a part of the storied franchise. Tran wandered around the London set, exploring ships and aliens “like a weird nerd.” As for Dern, the first day on set brought back potent childhood memories. When Dern was little, she visited her father, actor Bruce Dern, on the set of Silent Running. There, Bruce befriended Douglas Trumbull, the visual-effects pioneer whose droids on that movie served as inspiration for C-3PO and R2-D2. Trumbull shared early sketches with Laura and Bruce. “I got ready for my first scene. And when they called ‘action,’ I opened my eyes and I saw C-3PO and started to cry,” she says. “When I was a kid, my dad told me about these two characters they were making for this next movie. So it just feels like it’s come full circle, to be in the company of these characters that I heard about and then grew to love. I felt like I was actually waking up in my childhood fantasy.” 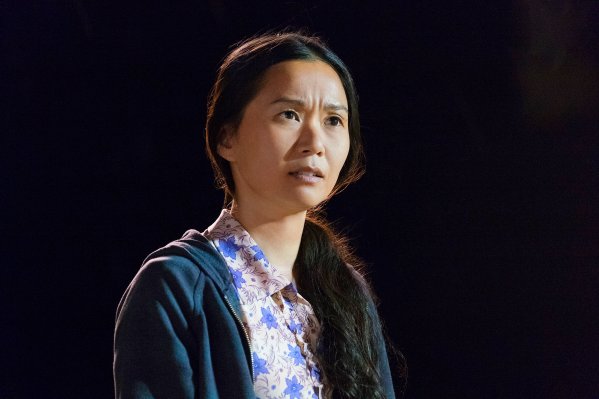 Downsizing's Hong Chau Gets Her Big Break in Miniature
Next Up: Editor's Pick