Sen. John McCain took to Medium Wednesday to rail against the confirmation of Steven Bradbury as general counsel of the Department of Transportation based on what McCain sees as Bradbury’s past justifications for torture.

While Bradbury was at the Department of Justice, he helped author a series of memos that provided legal justification for 13 so-called “enhanced interrogation techniques,” including waterboarding, forced nudity and humiliation, physical force, cramped quarters and more. Bradbury’s role in these memos, McCain wrote in a post titled “There Can Be No Justification For Torture,” precludes him from the public trust necessary to hold political office.

“I cast my vote against Mr. Bradbury not because I believe him to be unpatriotic or malevolent, but because I believe that what is at stake in this confirmation vote, much like what we stand to gain or lose in the war we are still fighting, transcends the immediate matter before us,” McCain wrote. “Ultimately, this is not about Mr. Bradbury. This is not about terrorists. This is about us  —  who we are and who we will be in the future.”

McCain famously spent more than five years in captivity during the Vietnam War, during which time he was subjected to conditions that, as he alluded in the Medium post, amounted to torture.

“Most people have never been tightly bound, made to remain in a stress position, and deprived of sleep for 48 hours,” McCain wrote. “Let me assure my colleagues: anyone who has suffered such treatment will know they’ve been tortured.”

Bradbury, who served as acting head of the Department of Justice Office of Legal Counsel from 2005 to 2009, was narrowly confirmed by the Senate on Tuesday, Politico reports. 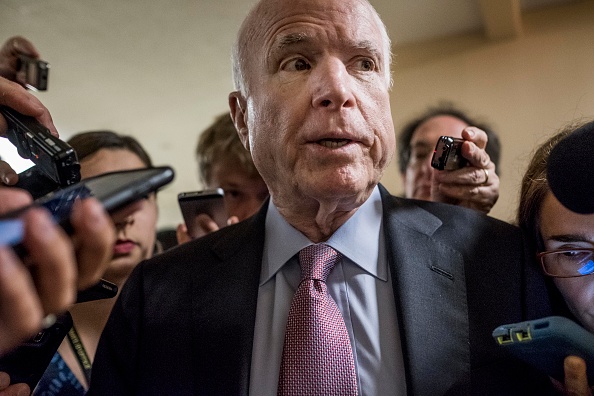 A Brief History of Donald Trump and John McCain's Feuds
Next Up: Editor's Pick