Rose McGowan Has Been Arrested on a Felony Drug Warrant

Rose McGowan was arrested in relation to a warrant for felony possession of a controlled substance.

The actress turned herself in, was arrested and booked before being released on a $5,000 bond in Virginia Tuesday, according to the Loudoun County Sheriffs Office.

“Ms. McGowan appeared in Loudoun County, Virginia, on November 14, 2017, to accept service of the Airports Authority Police arrest warrant, and she was released on a $5,000 unsecured bond,” a spokesperson for the department said.

The warrant, obtained by the Metropolitan Washington Airports Authority Police Department, was issued on Feb. 1, according to the Associated Press.

Police launched an investigation after they allegedly found traces of narcotics in personal belongings left behind on a United flight arriving at the Washington Dulles International Airport on Jan. 20, the AP reported.

“Our police have attempted to contact Ms. McGowan so that she can appear in a Loudoun County Virginia court to respond to the charge,” Yingling said in October.

The fact there was a warrant out for the star’s arrest surfaced after the actress brought it upon social media in October.

The 44-year-old – who has accused Hollywood producer Harvey Weinstein of sexually assaulting her – claimed the warrant was part of a conspiracy to silence her.

“Are they trying to silence me? There is a warrant out for my arrest in Virginia. What a load of HORSES—,” she tweeted.

It is not clear when the actress became aware of the warrant.

A spokesperson for Weinstein previously told PEOPLE in a statement, “Any allegations of non-consensual sex are unequivocally denied by Mr. Weinstein. Mr. Weinstein has further confirmed that there were never any acts of retaliation against any women for refusing his advances.” 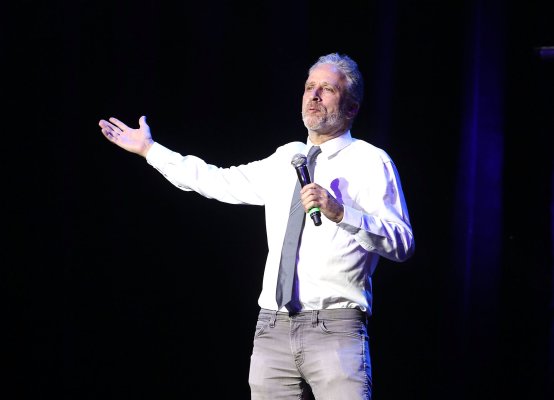 'Could I Have Done More?' Jon Stewart Addresses Louis C.K.'s Sexual Misconduct
Next Up: Editor's Pick