Donald Trump and LaVar Ball Really Do Deserve Each Other

LaVar Ball (R), father of LiAngelo Ball and the owner of the Big Baller brand, poses for a selfie with a fan during a promotional event in Shanghai on November 10, 2017. LiAngelo Ball, the younger brother of Los Angeles Lakers star Lonzo Ball, was among three college basketball players arrested in China on suspicion of shoplifting, US media reports said on November 8.
STR—AFP/Getty Images
By Sean Gregory

At the start of this year, if you would have told me I’d be interviewing a China scholar about a deal in which President of the United States asks his Chinese counterpart, Xi Jinping, for help to free three UCLA basketball players who’ve been held in a Chinese hotel for allegedly stealing sunglasses, I would have scoffed. If you said that one of those UCLA players was LiAngelo Ball, son of LaVar Ball — proprietor of $495 shoes, controversial and outspoken father of Los Angeles Lakers rookie Lonzo Ball — I would have laughed even harder.

Bet the under on that one, since I had to call up UCLA’s Shirley Wang Endowed Chair in US-China Relations & Communications, Min Zhou, to talk about LaVar Ball.

In hindsight, however, that LaVar Ball and Donald Trump would cross paths in the frenetic, utterly unpredictable 2017 news cycle was all but inevitable. Before returning home from a 12-day trip through Asia, President Trump on Tuesday confirmed that he asked President Xi, during Trump’s state visit to Beijing, to intervene on behalf of UCLA freshman basketball players Ball, Jalen Hill, and Cody Riley, who were arrested on shoplifting charges while in Hangzhou for UCLA’s opening game against Georgia Tech on Nov. 10. “They’re working on it right now,” Trump said. The players boarded a flight back to Los Angeles today.

“What they did was unfortunate,” Trump told reporters before leaving Manila and returning to Washington. Shoplifting penalties can vary greatly in China, but the players could have conceivably faced multiple years in jail.

Yes, Trump’s rescue of the Ball family is shrouded in symbolism. The President and LaVar Ball are classic carnival barkers who relish the media limelight. (Among LaVar Ball’s most outrageous statements: that Lonzo, the Lakers rookie, is the best player on the planet. He’s averaging 9.5 points per game, on an unseemly 31.3% shooting, for the 6-8 Lakers) They both appeared in WWE matches. They’re creations of our reality show world — while Trump had The Apprentice, Ball offers Ball In The Family on Facebook. They provoke strong reactions, positive and negative. Many people on social media have imagined Trump and Ball holding a joint press conference in the wake of the shoplifting charges. That would be quite a show.

This story, however, is more than an amusing sidelight. It does raise questions about selective justice. While the UCLA players go free, what about the human rights activists still imprisoned in China? “It’s easier for China to release American students than political dissidents,” says Zhou, the expert in China-U.S. relations, in a phone interview. “That’s a much more sensitive issue.”

The high-profile status of the UCLA players likely helped expedite their release. The Wall Street Journal noted that Detroit-native Wendell Brown, who was coaching a local American football team in China, is still in a Chinese jail after a September 2016 bar fight (he was charged with intentional assault).

China’s release of the basketball players carries diplomatic consequences as the world’s two largest economies haggle over trade and the North Korea nuclear threat. “It’s very important,” Zhou, a member of UCLA’s sociology department. “It’s a positive sign that the countries can work together.” The timing of the arrests helped the freshmen. Trump was also in China, on a state visit, when goodwill between countries generally ratchets up a level. Zhou’s happy China didn’t overtly use the detained students bargaining chips with the U.S. But don’t be surprised, she says, if China expects something in return down the road. “There’s still some sort of bargaining involved,” she says. “I’m doing you favor.”

Zhou’s thrilled that the students are returning home. “Kids make mistakes, and they should be given second chances,” she says.

Where does everyone go from here? UCLA coach Steve Alford will likely hand down some sort of suspension for his players. But at this rate, go ahead and expect LiAngelo Ball to hit the shot that sends UCLA to the Final Four, while his dad waves his Big Baller Brand kicks in the crowd. It’s November 2017. Anything goes. 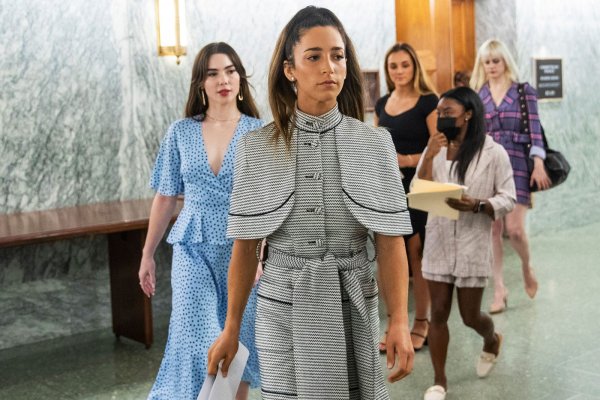 Aly Raisman Opens Up About Sexual Abuse
Next Up: Editor's Pick