While Stephen Colbert has been a vocal critic of Donald Trump’s time in the Oval Office, he had a surprisingly apolitical critique to offer about the President when he was a guest on The Late Show with Stephen Colbert.

In an interview with GQ, Colbert revealed that he thinks that Trump is boring, an observation that’s gained less momentum from the public than, say, than Colbert’s views on Trump’s healthcare plan or Trump’s Twitter fingers.

“Trump is actually kind of a boring guest,” he said. “My brother Ed was in the audience the night that Trump was on, in 2015. And after the show, he goes, ‘Okay, so he’s not a dummy.’ Because Trump wouldn’t even look me in the eye, really. He put his hands in his lap like a little boy, and he was very, very safe. Obviously, there’s an element of fear of making a mistake—what’s he going to get out of the interview if he’s too entertaining?”

That’s not to say that Colbert withheld his dissatisfaction with Trump as the leader of the country in the rest of the interview; later, he went on to compare Donald Trump’s representation of the U.S. to “hearing little children say filthy words. It shocks you and makes you wonder how this came about.” 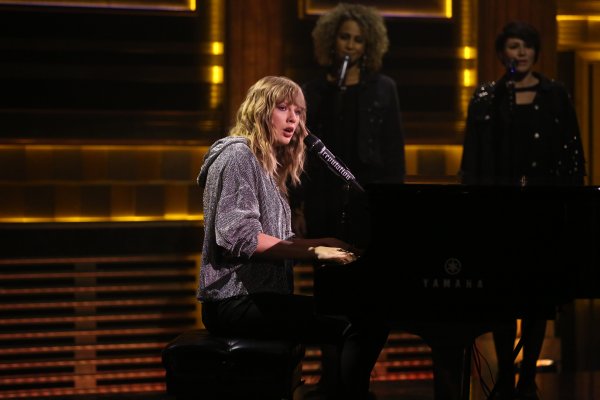 Taylor Swift Made an Emotional Visit to Jimmy Fallon's Show
Next Up: Editor's Pick