Back in 2015, then Vice President Joe Biden appeared on The Late Show and host Stephen Colbert peppered him with questions about whether he’d run for president in 2016. However, Biden was still reeling from the death of his son, Beau, and Biden said that he was unable to commit “110 per cent” to the task of running for president, despite the fact that Beau had urged him to continue to serve. Biden returned to The Late Show on Monday night and Colbert was ready for him. “I’m not gonna ask,” said Colbert, before immediately asking Biden if he planned to run in 2020.

As for that whole 2020 question, Biden wouldn’t answer other than to say that “the country’s never been more divided, we need a unifier.”

He also provided an update on his thoughts on President Donald Trump.

When Biden was on the show back in 2015, Biden suggested that the American public give Trump a shot, before judging him. “Have we given him enough of a shot at this point?” Colbert asked. Biden said he reached his tipping point with Trump after his “deafening” during the white nationalist rally in Charlottesville, Va., where neo-Nazis were chanting “the same exact bile” against Jews that the Nazis used in the 1930s in Germany and a protester was killed by a white supremacist. Biden said there is now “a battle for the soul of this country,” and called for Americans to say “enough is enough.”

They also discussed the risks of “normalizing” Trump’s behavior. “What do you think has changed about the presidency with him being President?” asked Colbert. “How will this influence future presidencies?” Biden replied, “God willing, this will go down as the single exception in American history.”

When Colbert pressed him about who such a unifier could be, Biden didn’t give any specifics, but he said there’s a whole new generation of Democrats entering politics who are ready to step up. 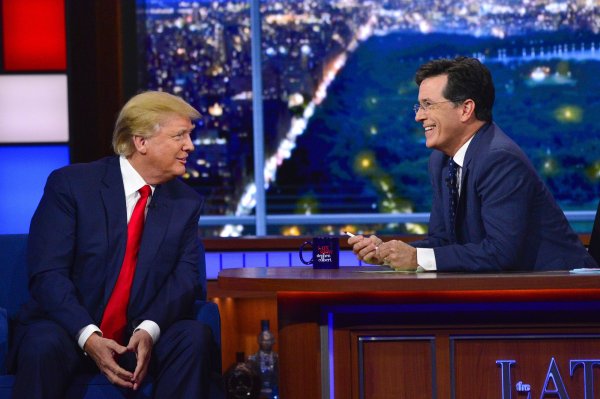 Stephen Colbert Has a Surprising Gripe About Donald Trump — And It Has Nothing to Do With Politics
Next Up: Editor's Pick